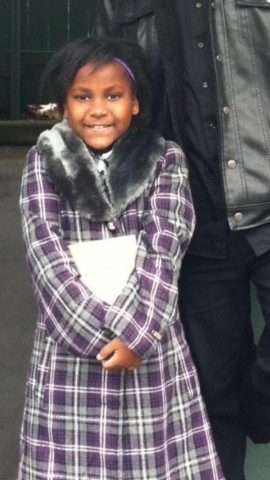 DEPARTED FROM
Kinshasa , Congo, The Democratic Republic Of The


Francoise DePaul is the last born from a family of 14 siblings. She was born in Kinshasa the capital city of the DRC during a time of political turmoil. DePaul, some of her siblings and her mother moved to South Africa for refuge and stayed there for five years in Pretoria. After seeking asylum in South Africa, a series of xenophobic attacks began taking place where they stayed which made it unsafe for them to remain there. DePaul and the rest of her family members were obligated to migrate back to the Congo in order to start the process of seeking asylum in America for safety and better education.

However, she has found that the long history in America of how minorities and especially black people are treated hasn't made it easer on her transition into this nation. As she pursues her education, she hopes to educate other Africans on how racism affects most of them even when they don't know how it affects them directly.


It was night time and there were cars everywhere and the roads were different, they were paved roads. It was definitely a culture shock. And seeing so many other different faces that didn’t look like mine but I felt security because I had my family.

And like the first thing, I just felt all the warmth and hugging my mom for the first time in a really long time because she was trying to build things up for us. I remember my first bed was this stuffed bear and it had like a sheet…… a sleeping bag that’s what it was. I kept that for SO long. But after awhile I had to let it go, but it was nice.

I was definitely excited to see new things mostly because I had my family, but I was terrified. I was like if I were to get lost here for like 35 seconds I’d be dead, I was trembling and hanging on to everyone making sure I wasn’t getting lost. Of course Congo is big, but there were so many more buildings and so many more walls to hide behind, I was scared of everything, especially because it was pitch black darkness with the snow coming down. But there was definitely a surge of excitement where I was continuing a new life, which is incredible.

I’m pretty sure I cried because I remember when she left I was crying. Because I asked “Can I just come with you?” but I didn’t understand money and that you have to buy stuff and I was just like, I’ll get my suitcase and I’ll come with you. But it didn't work like that. And I remember just seeing her for the first time and just squeezing her. I literally spelt on her lap because I was like I’m not leaving you.

It was really nice and comforting and just having my whole family together and having a lot of my other siblings coming to visit us and having that time to connect with my mom again is something that I won’t forget.

DEPARTED FROM
Kinshasa , Congo, The Democratic Republic Of The