"There was an inherent pressure all my life that to go to America was to be something more and to stay back in India was even some type indication that you were not "good enough"." 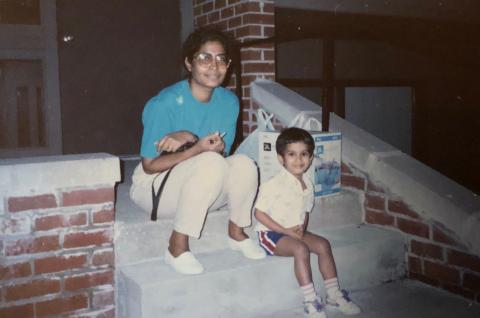 My husband got a job in Horsham, Pennsylvania and we chose to live in Hillsborough NJ because my sister was already living there. It was important to be close to family. My dad primarily influenced me to come to America. My dad came to America to do his post-doctoral thesis at CalTech. He was really taken with being here, he felt America was on the cusp of something big that was going to happen. He went back to India for family reasons, but I always feel given a choice he would’ve stayed back in California. He made it feel like it was heaven on earth. There was part of me that felt more than influenced, that I was supposed to live out a dream of his that he was unable to. To achieve something that he deferred. But it was not just him. When people came back to India from America, people made it seem like it was such an affluent place, and I wanted to experience that slice of life. I wanted to know what people were raving about and experiencing- and know whether it was real or just embellishment. Perhaps an underlying reason as well was that growing up, America seemed like a beacon, I would see the best and brightest people go to America. There was an inherent pressure all my life that to go to America was to be something more and to stay back in India was even some type indication that you were not "good enough". Of all the reasons why I chose to go to America, the simplest is my sister was already living there, in New Jersey. She is the only sister I have, and I simply wanted to be close to her.

When I first came to America, I initially felt anxious. I had a small son with me at that time and I didn't know whether this would be the right decision for him. I was excited to make a new life, but I had a pang of regret and pain of missing my hometown. I left behind familiar sounds, languages, and of course, I left my parents behind. When you’re young, you’re never looking that far into the future. You don’t think about your parents growing old when you move away. I wasn't anxious about what would happen with them, I was just sad that I had left them at all. In the end, I was really just hoping for the best.

Everything was unfamiliar the first few days. The smells, sounds, the entire environment. All the sensory details you take for granted was all taken away from me. It was obviously less chaotic, and much cleaner as well. Perhaps the cleanliness stood out to me because of my son. He was only three years old at the time but he kept falling ill. I was hoping that perhaps this cleanliness would help. It was comforting to know that every time I opened the tap, water would always come out. It was unfamiliar that such a basic amenity we could take for granted.