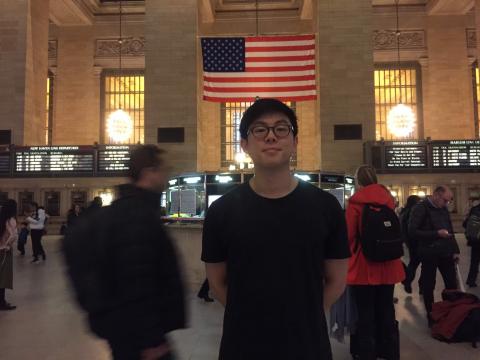 
Minwoo Chadwick Yim, 23, is an exchange student at the University of Washington from Sydney, Australia. September 2017 was his first time touching down or setting foot on American soil, despite previous travels to Asia and around Oceania. He’s the first of his siblings to live so far from home, especially for so long. His 16-year-old sister stayed a month in China, and Minwoo didn’t mention any travels of their 20-year-old brother.
Minwoo wanted to do an exchange program from the University of Sydney and originally thought he’d go to Germany. His second choices, when that didn’t pan out, were Manchester in the U.K. and Seattle, here in the U.S. These choices were due to his favorite bands, as an avid music fan. Out of applications to both, he was told he got Seattle.

This is his sixth year of a five-year degree. “I know the math doesn’t work out,” he said. But the combination of a double major in Business and IT and two years of part-time school to participate in on-campus societies has extended his degree.

Minwoo is his Korean name, phonetically translated. He explains that his parents (and he, too) had intended to go back to Korea and ended up staying in Australia, yet they still decided not to give him a “common, Anglo-Saxon name, which is funny ‘cause my sister’s name is Hannah.” He was actually a Korean citizen for 18 years, before switching to Australian citizenship, and is bilingual.

His stay is quickly coming to a close, with the exchange program ending with the UW’s winter quarter this March, 2018.


So I arrived at night. I think, it must have been a Tuesday. It was rainy. I remember it was rainy, and I was thinking “Aw man, Seattle must rain a lot!”

It’s pretty far from SeaTac to International District. You know, when you first get there, it- it feels longer than it actually is because you- you’re always alert and trying to figure out when I need to get off.

I know that Seattle has a high homeless population, *pats knees* but that was kinda shocking to me that in the rain there was so *pats knees* many homeless people. And so many people who were... homeless and disabled. There definitely... isn’t as many... people going through homelessness in Sydney, and so it’s a very different and- well, that was eye-opening.

Another thing is everything was closed. Um, *laughs* I mean, most things were closed, which was surprising.

I went straight to the hostel to check in everything.

I’d never been in a hostel before, so I did not know what to expect. It was an old- oh man, it must have been built in the 70s/80s. So you kinda walk in, and its narrow and it has a really old elevator system. The doors are made out of old, dark wood. It smells a little wet in there, to be honest. But. They had a big common area. They gave free towels and had warm showers. I was not expecting a warm shower. I have no idea why I wasn’t expecting a warm shower. But. That’s just the reality of it. I got there and I was like, “Yes, a warm shower. And free towels. That’s great.” It was just really nice.