First Days Project
My name is Swatantra Pidara.
"On the night of 27th August 1968 my father's friend dropped me at Bombay airport and I took the Air India flight to London via Beirut, Frankfurt, Paris and I had to change the plane for the next part of the journey to the USA." 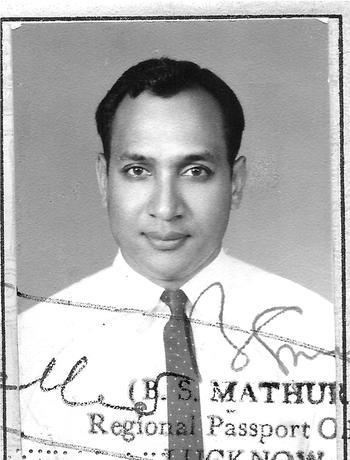 On the night of 27th August 1968 my father's friend dropped me at Bombay airport and I took the Air India flight to London via Beirut, Frankfurt, Paris and I had to change the plane for the next part of the journey to the USA. It was morning when the plane touched Frankfurt and German officers had a kind palish dress, the French officers in Paris had rosy dresses and at London the officers had blue dresses. When we arrived at New York, I had to clear the immigration. There the immigration officer demanded papers and I could not understand him and I was trying to make some sense when he pulled all the papers from hand and did what he had to do. I was not used to the American accent and impatience with fumbling handicapped person with one leg. Till this day I recall that.

The Air India officer lady guided me to the Allegheny flight to Philadelphia from La Guardia and I had to change the Airports. But she was very nice and got me bus ticket, etc.

I did not have much of the luggage except a 20"x 16" bag and a bag in my hand. I used artificial leg and walked with a cane and held crutches in my hand. The African American porter [red cap] pushed my bag to the outside and towards the bus terminal on a cart. And stood there expecting some payments. I had no idea what was the range of payments, so I took out 75 cents and gave him. Which he did not like and returned me the payment and walked away. Till this day I feel bad about it.

It was a very cozy bus and soon we were at airport took the flight in a small plane as compared to big plane that brought me to Philadelphia. It was 5.30 and soon I was out and took the taxi for $3 or so to University of Penn campus. He dropped me at 36th and Locust walk. It was about 6 PM and I did not know what to do and where to go. I shall never forget that moment when I was in the very centre of the University Campus right by the Christian Association when three Indians Vijay Kapoor, Nagpal and Dr. Wajwa arrived from nowhere along with Tilak Tewari and all of them later on helped me much. They took me to 37th and Spruce the undergraduate dorm and talked to the lady. I had no idea of the accent so the old lady from the desk asked for some money for the stay and while I fumbled she said sharply, "We will return the unused money." It was another shock to live with the so called up-front-ness of the American people. Vijay and others took me across the street snack shop and made me eat toast and cheese. I had no taste for it. But I ate and took tea. They promised to guide me next day or so in everything. I went to my room on 3rd floor and soon I was fast asleep and it must have been early 7AM when I woke up and looked outside and in those days it was a very busy trolley track and saw an Indian lady {Mrs. Gita Rao} getting off the trolley. I thanked God that my first day in a new country was over and I had to get ready to go and see the Head of the Department Dr. Rocher. Vijay Kapoor came to guide me once again and fed me cheese and toast etc. I some how ate it. But till this day I have no taste for it.