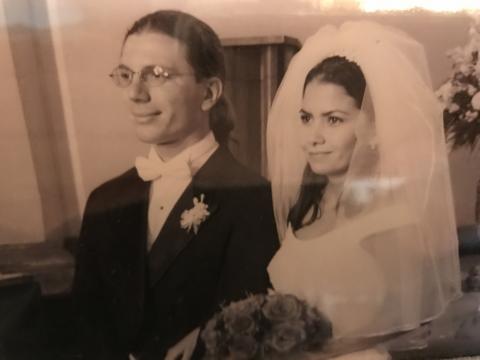 
I do remember my first days; I don’t think I’m ever going to forget them. I met my husband in Mexico while he was working at GE. When his work visa expired, we moved from Monterrey to San Francisco. He made me get tennis shoes to walk in the city. I was used to dressing much more formally. I had many, many high heels that I wore to go to the fancy building where I worked in Mexico, but I did not own a flat pair of shoes.

That first day of discovery, I stopped in a bagel shop to ask a lady the name of the church down the street. She corrected me saying that it was a Jewish Temple and that she and her daughter were heading to the Jewish Community Center. I had implied that the she, her daughter and the Temple were Catholic, like everybody else I knew in Mexico. I felt ashamed.

I walked from Presidio to San Francisco City College to register myself in an ESL class. It was the best thing I could have done. Our professor was an enthusiastic, young African American lady, and although I liked her, she was not the reason I came back day after day. My real teachers were my classmates. There was a group of senior citizens from Russia, and a girl I thought was Asian but when she introduced herself to me in Spanish, I learned she was from Costa Rica. There was a Mayan boy, who had come to live with an American family he met at a restaurant in Cancun. There were Chinese, Japanese and some Indians too. And other people whose nationality I could not identify. I was fascinated. I sat in that class for weeks enjoying and learning from this amazing group. I loved hearing their stories. They were engineers, doctors, artists, cooks, journalists…

Before America, I was always surrounded by people who looked the same as me. They had the same religion, nationally and followed the same cultural traditions. This class was my starting point. Sitting in a squeaky, old school chair, I knew I was going to have a great future in a nation of such rich diversity. I learned that immigrants work hard, and that their contribution to this society is invaluable.

I went to work at Univision and then during the dot-com boom, in a couple of startup companies. Later we moved to Boston and I got a masters degree from Harvard while working full time in a publishing company. These days I am a mom who teaches her kids the importance of learning from others.

A couple of times that very first week in the US, I had to call my husband to pick me up somewhere in the city on his way home from work. My legs were adjusting to the San Francisco hills and the flat shoes that I was wearing. Now I know that the cramping, achy muscles I had were nothing more than growing pains. I was adapting to my new reality. I was an immigrant.