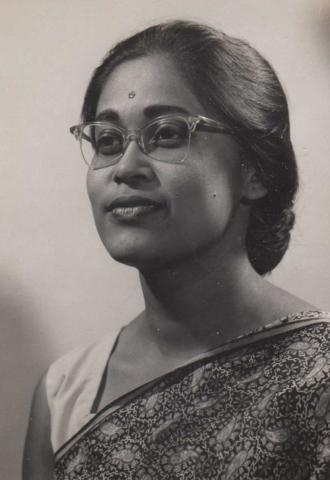 My first time in the United States
I arrived twice in the United States. The first time was in 1964. I was 27 years old and on a Fulbright Scholarship in Social Work. There was a program in the United States in International Service that brought together young leaders from around the world in human services. There were about 40-60 countries represented. We came here for 6 months. I was the youngest in the group. It was just so weird. It was weird from the start. The plane had to stop in between and fuel in various places. There was a homesick girl who was stuck on the wrong plane. At one point, a Turkish general was about to get in, and we had to get off the plane! When we finally arrived in the US, our group spent some time at the UN, and they made me the leader of the Indian delegation.

After New York, I came to St. Paul, Minnesota and stayed with host families, some of whom are still my friends.

My second time in the United States
In 1967, I went back to the US. I was a psychiatric social worker in Bombay and there was a war going on with Pakistan. There were curfews all over. A friend and I were living in Bombay right by the Gateway of India; we could see it from our balcony. The Indian Navy was parked outside. Even though the curfew was very strong, we would sneak out and watch from the shadows. The naval officers would find us and drive us back home. Soon we didn’t want to live in the shadows. My friend also wanted to get out. We said, let’s get out of this country.

I had three options for further study in America, going to New York, Bryn Mawr in Pennsylvania and the University of Michigan in Ann Arbor. I studied at Tata Institute for Social Sciences in Bombay and earned a Masters’ degree. The scores from the Tata Institute were accepted by these schools.

But foreign currency was very expensive, and the Indian government wouldn’t let money out of the country. I thought, “I’m not coming, I can’t afford to do this.” I forgot all about it for a while.

Then life changed. The University of Michigan wired me that they had a degree program for two foreign students to do their PhD. They said, “we will pay for everything. You cannot work, but we will give you money for living expenses.” It was called the Barbour Scholarship.

I accepted the offer. I had been to Ann Arbor before, so I had friends there. After I started the program, I realized that in my field, I didn’t want to do a PhD because I didn’t want to be limited to just teaching others. So, I only stayed two semesters and the university agreed to give me a Masters’ Degree.

I was then allowed to work for 18 months. I had friends in Minnesota who said they could help me find a job and that I could stay with them. One day I get a call from the Foreign Student Advisors department. They told me they had gotten a letter from my department director who didn’t want to let me leave the program. So, the person at the foreign student advisor’s department said that I should apply for permanent residency and that this would allow me to stay as long as I wanted: a green card. This person said, “your department director did not fill in the form. So I have filled it in and now you fill it in front of me.”

My first day
I arrived in Ann Arbor in August of 1967. The manager of the Barbour Scholarship picked me up from the airport. They were going to move me to a satellite campus temporarily because the main campus was just being built. I remember they were just putting down the sod. It was raining, dismal. It was terrible. They put me up for the night at the Student Union where there were rooms and a restaurant downstairs. Tired and jetlagged, I wondered “what the heck am I doing here?” Since I hadn’t eaten much on the flight, I thought I would order breakfast. I stood on a line to order eggs. I asked for “poached eggs.” The person said, “Sunnyside up?” I thought, no it’s not sunny, so I said, “No, I don’t think I can have Sunnyside up.” The person explained the phrase, but then noticing my confusion said, “You can! Have you looked outside?” It took me a while to learn the American idioms. I made some major faux pas! I learned expressions like “knock me up” and that the trunk of a car is called the “boot” not “dicky.”

On my first day, they took me to where I’d be living on the satellite North Campus. It was a 2-bedroom “split room” with a shared bathroom in the middle shared. There were two women one each side. There was space for beds and a desk.

My impression on the first day was that the town was very small, we walked everywhere. It was an urban area, but it was also a university campus. There were one or two grocery stores and a tiny little downtown.

I arrived in Ann Arbor in the middle of the Detroit Riots of 1967-1968. Ann Arbor is not far from Detroit. One day, I needed to go into the library but there were people marching, going right around the building and I had to walk through that mob.

My roommate was from Germany. Her name was Inga. Inga was a piece of work. Her mother was a physician. She would pop pills all the time. I remember one time she went crazy. The two women on the other side, one was an American girl, Laura and the other was an Indian woman. We all became good friends. I couldn’t tolerate the North campus because I couldn’t cook there. I had to buy all my meals and that was difficult on such a tiny allowance. We also had these horrible “sherry parties.”

I left and came to Minneapolis to do an internship and fieldwork as part of my curriculum. I worked at a Social Service Agency in an Ann Arbor ghetto. I had friends who lived there, but no one believed that they lived there. They loved me. I would wear a sari. One time they were marching through the streets, all these black women and people would be peaking out of their windows and closing the drapes. I walked with them.

I made lots of friends. One woman who was also in the School of Social Work, she and I became very fast friends. She eventually became quite a mucky muck. Even though I made friends wherever I went, part of me was always very private. I needed time to myself. If I didn’t like what’s going on, I would stay away.

For the longest time, I didn’t want to change my Indian citizenship. I was Director of Treatment at the Child and Family Organization, located next to United Way. There was a hallway that connected the United Way with our building. The United Way’s lobby would stay open in those days and individuals could take shelter there overnight. This was during Ronald Reagan’s time. He decimated people’s lives through Reaganomics. Now, for the first time, I saw families coming through with children. I thought to myself, “I’ve got to change this. I have to do my part. I have to vote.” And that’s when I became a US citizen. I was given a little flag.

A lot of people come to this country and their circle remains primarily Indian. I always felt that you have to be part of your environment and mix with the general public. I have Indian and Bengali family members and friends and I’ve also made friends here who are Black-American.