"My dad got down on his hands and knees and kissed the doormat, the door mat to the door, the apartment door and then we went inside." 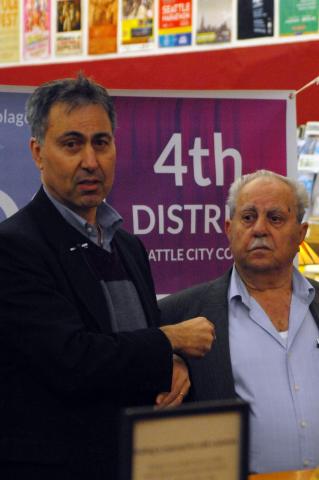 Taso G. Lagos, a University of Washington professor, has spent most of his life on “The Ave” in Seattle’s University District. Lagos was born and raised in a small village outside of Athens, Greece until he was eight years old when he and his family left their small village and journeyed to their new home in the U.S. on September 8, 1967.

Lagos, along with his parents and older brother, was greeted at the airport in Seattle by a friendly face, an uncle who had moved to the U.S. years earlier and started a successful dental practice—“Uncle John” took the family in until they were able to live on their own.

Lagos’ father George worked as a plumber until a friend of a friend offered him a share of a restaurant business on The Ave. Lagos spent much of his free time working in the restaurant alongside his father, brother, and even his mother who didn’t speak a word of English yet somehow became a surrogate mother to many college students who frequented the establishment.

With no English skills, separated from his childhood friends, Lagos didn’t do well in school his first year and experienced bullying and depression for years after arriving. “I told my mother that I was going back to Greece, I’d walk there if I had to,” he said. Lagos explains that it wasn’t until many years later that he realized that the village in Greece that he wanted so badly to return to had been replaced by a new village, the U-District.


Taso G. Lagos, I was born in Greece, and we came here to the U.S. on September 8th, 1967. So we got on the plane, we flew Sabina airways to Brussels and then from there we flew to New York and there we had a layover, then from New York to WA we flew to Seattle. When we came it was early evening, I could just barely see some of the lights were coming on, you know September, it was evening. We arrived and Uncle John was there to pick us up at the airport, SeaTac, and then we drove to Viking Apartments which are in Lynwood off of Aurora, near what is now Harris Ford and we got out of the car, my uncle’s car, and we went to the second story of this apartment building, the Viking Apartments like I said. My dad, got down on his hands and knees and kissed the doormat, the door mat to the door, the apartment door and then we went inside. That was Saturday evening, I remember having to go to the bathroom that night. You know I went to the bathroom and I’d never seen a flush toilet so it was my first experience. I mean I went to the bathroom on the airplane but somehow the water was like, ‘what is this?’. So I pushed the button and I thought I broke the toilet so I had to run out and tell my mother and she goes “oh, no, no, it’s okay.” We got up the next day, Sunday morning and Uncle John gave us corn flakes with cold milk, which I’d never seen in my life before. We always had warm milk because we had goats in the house, and to have cow’s milk, cold, with these corn flakes, sweet, I couldn’t eat it. I refused, so I had nothing to eat that day.