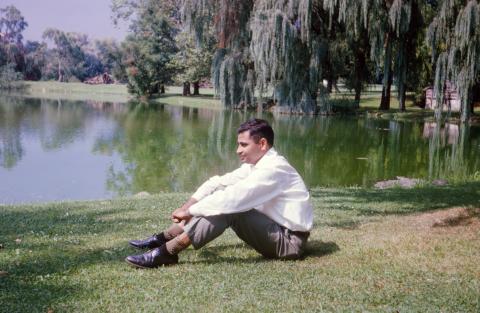 Can you describe the process of coming to the US?

"I decided to go to the U.S. to study so that I could get a better education and earn more money for my family. One of my uncles went to London to study, and sent us back gifts and letters describing how great life was in England. That motivated me to go abroad so that I could lead a better life and earn more money. I was one of the oldest sons and I had eleven other siblings to support, along with my mom. I didn’t know what to do, so I went to the United States Information Library in Hyderabad. It was air conditioned with all kinds of books. I did all the reading by myself – there was nobody there to guide me. There were a lot of books and information about American universities, so I read up and then applied to all the engineering colleges I could. Once I got admission, I had to go to the American consulate in India to get a student visa. I applied to quite a few universities – I got admission in Oklahoma, University of Illinois, Virginia Tech. Virginia Tech was the only college with reasonable tuition and board – it was $200/quarter. The rest of the other universities were out of my father’s reach; he couldn’t afford to pay more than that.

I landed in La Guardia airport in New York City in 1959. The airhostess knew that I was a foreigner, so she came out with me to the street and advised me to go to the YMCA. It was very cheap – only $2/night for a room. I was hungry when I got there so I went to the lunch counter where you could order fast food. I didn’t know what to order since the menu looked different from what I was used to. The waitress was an African American lady and she realized my problem. She said, “Honey, try this hotdog. You’ll like it.” I didn’t know what a hotdog was, but she put a lot of mustard on it, and I took a bite. She said I would enjoy it but I said, “No I don’t like this - I don’t want to eat this.” I just went to bed. I was hungry and I didn’t know what to eat. I woke up the next morning to go to Roanoke, Virginia and then to Virginia Tech."

Did you have any ideas about what typical American life was like?

"I had the impression that most Americans are nice people. They want to be helpful; they don’t have malice toward anybody. Only a very small percentage of people are prejudiced. For example, one quarter I couldn’t pay my tuition and I couldn’t take out a loan from the bank. I went to the professor for help and he vouched for me at the bank. That was $200 – that was a lot of money at the time. I still remember him for the good act he did. I don’t know what I would have done without him.

I got an idea about American family life since my professors used to invite the foreign students to their homes during the holidays. They wanted to have interactions with the foreign students to see how we were doing. We used to have dinner with the professors’ families – we got some idea of American life through them. The professors had wives and children, and we were treated very nicely. Then we knew how the American family lived. During Christmas vacation we had no place to go – there was an organization that would invite the foreign students to spend the holidays with the families. I was invited to East Lansing Michigan to spend the holidays with a farming family. They had a small daughter and son and a big farm. I spent a week with them – I got some basic idea about American farming families. They showed me the cattle – that was a good exposure. That was a great program and a good experience. Spending time with professors’ families showed me that Americans are very family-oriented and religious people. They want to help a person if they are in need. But that was also my first experience where I realized there was discrimination. I took the bus from Virginia to Illinois to visit my host family, and the first stop was at Indianapolis. I wanted to go to the men’s room – then I noticed that there were black and white restrooms. I knew there was discrimination, but I didn’t know which restroom I should go to. It was sort of puzzling – I didn’t know what to do. So I said, “Okay, let me go into the white men’s room and see what happens.” Nothing happened, but they were all looking at me. The white people probably thought I looked strange. That was the first encounter where I realized there was discrimination. A sort of subtle discrimination. Even though I didn’t look like an African American – probably they thought I was from a foreign country. Before I came to America I thought anybody can do whatever they want to. It’s a free society. But I had no idea about discrimination because at that time it was not publicized. We heard stories about the southern United States that there were black and white tensions, but I didn’t realize that it was that extreme. And I went to college in the south, so that was shocking."

Can you talk about more your experiences with race and segregation in the south?

"There was not a single black student in Virginia Tech. I don’t know if they weren’t given admission or didn’t apply. Other than the whites, there were six foreign graduate students from India and the Middle East, and I was the only Indian undergraduate student. One day three Indian graduate students and I went to Roanoke to go shopping. We went to a snackbar to have lunch. The four of us were sitting – the waitress was going back and forth, back and forth, and was not stopping to take our order. We asked her to take our order – she wouldn’t stop or say anything. She was serving people but not us. Then one of my friends got mad and said, “They are discriminating against us.” He wanted to argue with the waitress, but I said there is no point in arguing since this is an accepted fact in the area – let’s just go out and eat somewhere else. So we just walked out without ordering anything and went to a grocery shop to buy bread and cheese and crackers and ate in the car. I felt bad. We never came across that kind of discrimination in India. It sort of affected me mentally… I thought maybe we don’t have any worth in this society. So psychologically it affected me.

But also at that time there was a foreign students association – for the foreign and local American students. They used to have group discussions, and they invited me to talk about our experiences. In that discussion I was the main speaker – I indicated my discrimination experiences in Roanoke. I mentioned that in the group meetings and they realized… the student population was educated and they realized that it was not good. Even though the students were from the south, they felt it was not good to be in a country like that. I knew that I should tell what happened – I was sort of bold."

*Note: This interview has been condensed and slightly modified from a longer interview conducted on April 14, 2014.