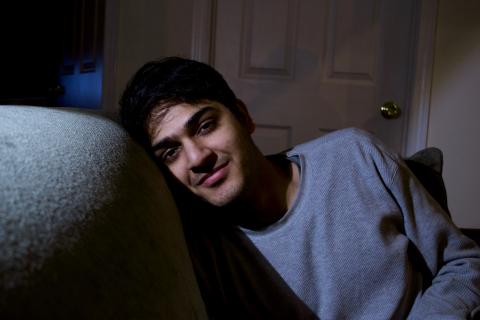 
Ameer Talal Mahmood is not your ordinary Pakistani immigrant. He was born in Chicago, Illinois, in 1994. One year after Ameer was born, he moved back to Pakistan with his parents and lived there until the age of 18. He’s American-born, but Pakistani-grown. On paper, he’s a U.S. citizen, but because he did not experience an American childhood, he still felt like an immigrant when he arrived in America.

At first, Ameer was excited to come to the United States, he expected to do a lot right away, but got bored pretty fast. Through his initial experiences in the United States, Ameer realized that America is not always how it is portrayed in films and television. Apart from the weather, he felt that middle-class living in America did not differ all that much from the daily life in Pakistan that he remembered.

After graduating from high school in Pakistan, Ameer moved to Seattle to pursue higher education. During his first year in the United States, he lived with his relatives in Everett in order to be eligible for in-state tuition at Washington state colleges and Universities. In the meantime, he worked at a 7/11 on 3rd Avenue in downtown Seattle, what he describes as “the ugly side of America,” filled with homelessness, shoplifting, and “gangster behavior.” It was a difficult working environment, but Ameer still liked it. He found the danger scary, but also exciting. He’s grateful to have worked there, it taught him how to be brave, mature and responsible. It was an experience he knows he would never have had back in Pakistan.


My name is Ameer, Ameer Talal Mahmood, I moved here from Pakistan. I was born in Chicago, Illinois. My parents were there for a couple of years.

My dad had taken a leave from his work. While they moved back [to Pakistan] I was around one years old. So I wasn’t here for almost 15 to 16 years.

The first day I came here was just like on a weekend, that was pretty chill. A week later, I started working. One whole year, I worked at a 7/11 downtown in Seattle.

It was a rough patch[place] to work at. But at the same time, working there, I kind of felt exciting because shit would go down all the time. I saw some of the thug life.

So it was on 3rd Avenue, that’s like where the, the gangster shit goes on if anything, you know. It gets pretty bad down there.

There was a lot of shoplifting, and we were told to not care about it, but I [would] like get pissed like “The fuck man? He’s just stealing from us and we won’t do shit?” So I would get like a lot of… I would get really confrontational with those people.

And I have been threatened. This big ass guy, he’s like “Imma whoop yo’ ass if you don’t walk out [on me],” and I was like, “Alright man, I did my job, if you’re not gonna put it back, go ahead.” I acted tough, I’m like, “Alright, get the fuck out, imma just call the police,” I acted tough, [but] inside I was like, I was shitting my pants! Because [he] was a big guy, and he just goes like, “I’m not afraid of going back to prison” you know? He looks like the kind of guy who’s just like, who would just punch me straight up if I tried to do anything. So I was like, “alright, I don’t get paid enough to care about that.”

I feel like coming here made me a lot more independent, and a lot more mature. I was born in one country you know, you’re just like living in a country, you grow there, you have your life there. And then you just, for 15 whole years you just grow up - 16 years, and then you come here. So you just feel like, “oh shit, this is all new.”