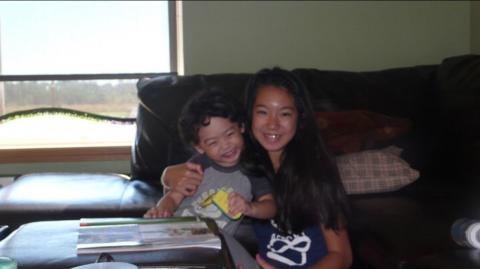 
Chyna Deboer was 10 years old when she moved to the United States with her older sister. Her parents wanted a better life and better education for her and her sister. Her grandparents who live in the U.S. agreed to adopt them. The rest of her family lives in the Philippines and she visits them around once a year. Her mom visits the U.S. once or twice a year, staying a couple months at a time.
Chyna moved to the rural town of Adna, WA from the big city of the Manila Philippines. Going from a population of around 1.78 million people to just around 3,000 in Adna. She started school at Adna Elementary in the 4th grade and graduated from Adna High School. She is now 20 years old and currently attends Washington State University where she is studying business.


My name is Chyna DeBoer and I’m twenty years old. I was ten years old when I came to Washington. My grandma was from the Philippines too and she moved here before me and she dated a white guy and she adopted me and my sister. So, it took like years to get all the paper work done for us to come here and then when we finally came here I was really having a culture shock because in the Philippines I lived in the capital, so there’s millions and millions of people and then here it was just like a little town. And then I moved here when it was February, so it was really cold here and then when I was used to the Philippines being 90 degrees every day. And then my grandparents decided I should go to school a couple days before, or a couple days after I came here. So, they took me to Adna Elementary School and it was a tough time because people were just staring at me, weren’t really like talking to me or anything. They just thought I was weird because I didn’t really know English beforehand, so I had to learn English while I was in school here. And then yeah, I was one of the only ones that were like had a culture there and the rest were Americans, so it was really different for them too. But, um as time went on, they um started being friends with me, um, they knew I had a hard time um, speaking English. So, they were really patient with me and people were actually really nice. But yeah, it was really a culture shock when I came here I didn’t know really what to expect. And I was used to having a maid in the Philippines and then here um we just do it ourselves. And I really missed the food in the Philippines and here it’s all more American food. So, yep.