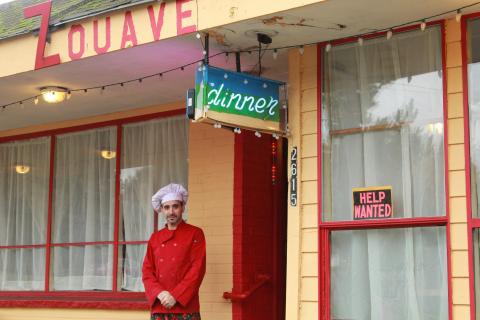 
Abe Hadjal, 50, comes from the Berber people of a French colony in Algeria. He grew up in a small village near the Atlas Mountains where he studied cooking before traveling to study and work in Switzerland, Spain and France to escape the Arabian school system.

“The political system was set up to Arabize most people,” he said. “For the Arabs that works for them but I'm not an Arab so for us it becomes a drag. It’s not fair but that's how it was set [up]. So we have to keep on studying Arabic anyway… You become a pillar of a political system which as a kid or a teenager, you're already against.”

Hadjal studied maps in Switzerland and got a photogrammetric diploma. After traveling he finally settled in Italy near Venice which re-ignited his passion for cooking. He left Italy when he was 21 and moved to Los Angeles in 1987.

“When you're in your early 20s, at least in my case, I was not always settle or happy where I was,” he said. “So I just decided I'd leave with my diploma in my thirst for a better job, a better life, and adventure all mixed in one.”

He worked in landscaping before getting a job in an Italian restaurant in LA. A friend in LA told Hadjal how similar Seattle is to how he described Italy and France when he first arrived, so hadjal decided to take the leap of faith. He worked two restaurant jobs in Pioneer Square and saved enough money to open a restaurant of his own.

“Having worked for mostly Italians, or Italian restaurants, I wanted to open an Italian place,” he said. “There is Greece, Turkey, Lebanon, Israel, Egypt, Tunisia, Algeria, Morocco, Spain, Portugal. There is an influence there between cultures and Italy is the best to represent that; it’s the center. So there is pasta, there is spices, everything.”

Hadjal has owned his restaurant, Zouave in Ravenna, for three and a half years with his wife Connie. He describes his style of cooking as it relates to his travels in Europe.

“When you know someone or a family member who'd go overseas, they'd take picture of places they saw then they bring them and they show them to you,” he said. “For me, that's the pictures I took; all those dishes I had or I cooked abroad I bring them back here and then I serve them and I let people judge for themselves… That's most humbling thing; cooking food and putting it in front of someone at their table so they can enjoy it.”

Even with the uncertainty that comes with a new political landscape in the US today, Hadjal is hopeful for not only the US but the world too.

“We got to this result all together,” he said. “Let’s all work together and progress and do something good for this country. That's all we want I hope and hopefully for the world too. That's how the world becomes a net, we are all connected to each other.”

He says that people are fundamentally the same no matter what country we live in and expresses the importance of putting our misunderstandings aside.

“It’s ok to talk about politics and religion and debate,” he said. “Hey let’s fight each other for an hour or two. Pretend it’s a football match, you have your team, I have mine and when it's over, its ok. Life is short. Empires come and go. Let's have some food and share food. Let's start with peace. Let's start with communion. Leave the fight away.”

Hadjal still has relatives in Algeria and France but made his choice years ago; America is the best.

“America allows you to cry and scratch and complain,” he said. “That works for me. Not every country will allow you do say that. Well, some places yes but you're not necessarily getting away with it. Here that’s ok. That’s something many people would take for granted. To me this is the best country in the world. I don’t care if they kick me out tomorrow, it still is the best.”


I always wanted to come to the United States; my dream since I was a teenager. I was wanted to go to Canada or USA.

The first few days I remember I bought one of those; I don’t know if they do exist anymore, one of those plastic cameras, you take pictures. Everywhere I went I took a picture.

I remember when I first came I asked the cab driver Hey can you take me to cheap hotel. I don't have a lot of money; I guess I tried to tell him cheap but decent. He said yeah no problem I know one. I remember he took me to this hotel where I paid 80 dollars a night! It was a nice hotel but I didn't plan on paying 80 dollars but it was ok.

Some friends I, we went shopping. We bought peanut butter, raisin bread. We wanted to eat something Christmas-y, American, something like that.

I learned after you travel from one country to another you never set up, at least in my case, I never put a mind set into what I expect. Coming to America I was thinking yeah Hamburger and coca cola for sure. Which in fact I had that for a few weeks until I started thinking, I don't think this is healthy, the I learned that there is a thing called burrito.

As much as a person is prepared, you think you are prepared for everything, you met Americans abroad and you spoke with them and you try to anticipate things there will always be something different. To me I figured everything is an unknown thing and you work your way through, you shed your own light and you try to find your path.