"They can speak what we call 'Bamboo English,' which is broken English. But yes, we understand." 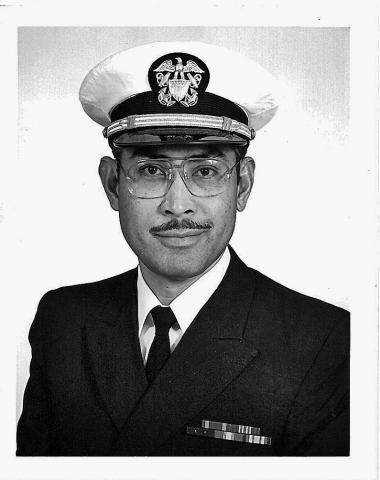 
Why did you decide to immigrate to America?

Even though I got a degree in the Philippines… I was a surveyor back home. Even though I was a surveyor, my job was infrequent. You know… and I could not. I tried to work for the Bureau of Lands, to get a secure job, you know. And because I didn’t know anyone, I couldn’t do it. I can’t get in there. So, my brother, my younger brother, joined the Navy before me. And he told me, he said, “Hey Gee, join the Navy. You get free board, free food, free clothing, and after 20 years you can retire. You get the retirement. The only thing about that is that the Filipinos during that time- we could not do anything except be a steward.

What was your first day in the U.S. like?

My first day in the States is… nice in a way, but shocking in a way also. You know. I enjoyed it because I’m here in the States and then you know, when I went to the South, the segregation. I didn’t understand that. I truly didn’t, but I got used to it.

Did you have any surprising experiences?

It was totally different then, you know. The segregation, you know. As a matter of fact, one of my experiences… when I arrived, I took a bus all the way from California to Jacksonville. Because, you know, I wanted to see the country. I didn’t sleep at night on the bus, I just looked out the window. I just wanted to see the country. And then I arrived in Jacksonville in July. At the bus station, I was- I wanted to use the restroom. I saw both signs on the doors. White. Colored. I was confused. It was the first time I was exposed to that. And then the janitor told me. He said, “You go to the white side, sir.” I look at myself, and I say, “OK.” So that was my first experience in downtown. I was stationed at Cecil [Air] Field. It’s closed now. I was stationed there until 1965. From there I went to the U.S.S. Forrestal in Norfolk.

What was it like when you first got to San Francisco? What did you think?

It was cold! It was winter, and of course the terrible thing was the Navy did not provide us any winter uniform. Because they did not have any winter uniform in the Philippines. It’s funny. We had to put a towel over our heads, because it was cold. And I was not impressed with something, because they didn’t take us anywhere. But then when they transferred us to San Diego… that train. The train, you know, you have a bed, you can see. I truly enjoyed it.

That must have been nice.

Yes, it was very nice. I said, “Boy!” And the reason why- you know after boot camp you got your choices. Make selections on where you want to get stationed. I selected Florida. I said, “I want to go to Miami!”

Did you speak English before you arrived?

Did you arrive by ship or airplane?

Before us, yes, they put them on a ship. But during my time, in 1961, they started flying all the recruits. As a matter of fact, on the way over here, I got New Year on the other side. And there’s Hawaii, and I got New Year again. Because they are after the date line. And I liked Hawaii, because we stopped over there. The First Class Filipino guy who was in charge- who was taking care of us- I think there were 11 of us or 12. He took us to the YMCA. We went swimming. I was very impressed. It was very nice. Even now, I like Hawaii. I told my wife, “Let’s retire in Hawaii!”