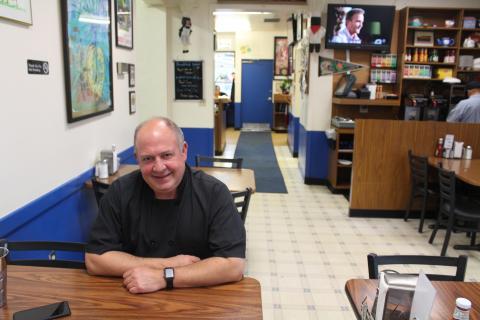 
Sikey Vlahos and his family emigrated from Greece back in 1971 when he was seven years old. They were trying to get away from the dictatorship at the time for a more promising economic outlook. He and his mother opened Voula's offshore cafe after he graduated high school in 1984, and have continued to serve the Portage Bay marina community for over three decades.


In the early sixties, my parents were working in factories in Germany, migrant workers. They gathered money and decided, “Okay we have enough, let’s go back to Greece.”

My dad decided, “Well let’s open a shish kebab restaurant.” Stand is actually what it was. The country was run by a dictator, and the FBI in the region would come and say, “Ooh you have a lot of business, if you want to stay in business, you have to pay up.” Well my dad did that for a little bit, but he got totally fed up with it, called up his brother and asked, “what is it going to take for me to come to the United States?” He filed the paperwork and proceeded to come here.

It was January when we flew into Seattle and it was one of the biggest snowstorms. I had never seen snow like that. My parents were fortunate enough to get jobs here right away, Father got a job as a tailor, and my mom got a job right up the street here on Roosevelt Way.

There weren’t a huge number of immigrants, and it was intriguing for a lot of kids. Because I was young, I picked up English very quickly, and I had no accent. I spoke fluent English and continued to speak fluent Greek.

In 1984 we went to the bank, got a loan to purchase the restaurant, and we started up, and it was just my mom and I at the time. That wall over there says a thousand words, there were kids that my mom would always take pictures with. All those kids are now 25 and above and now they are bringing their kids. That was my mom’s character, my mom’s personality. To this day, she comes in here she is just prancing around talking to customers. Just this little social butterfly.