"But it was just hard because you don’t have anyone else who’s really -- worried, like genuinely worried about you, you know? It’s just… people don’t really ask you if you’re okay." 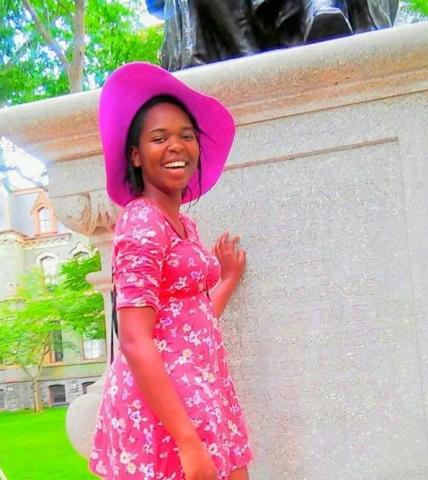 
What was your first day like in the United States?

It was very overwhelming…I think that’s like the most outstanding thing. Cause I…Well, when I was still in the plane, I looked down and saw so many trees and I was very surprised. Because I didn’t expect---that was my idea of America, I didn’t think I’d find as many trees as I see now.

So everything was just so huge! I mean, I got to DC and oh my god. That airport was huge! You know how you have to get on a train to get from one section to another section? I was like, “Oh my god, this is like overwhelming.” It was extremely overwhelming.

And then I got to Bryn Mawr. It was really pretty. I think I was just in awe the whole time. I was tired, but in awe because everything was just so different.

From the trains---your functional trains (laughs)--- you have um, you know. Things are just---they seemed so organized and it was something I never really had at home.

Oh, the people were really nice. I mean I got a good welcome. The customs people were obviously good. They’re great.

What was your first year like as a whole?

It was…um, interesting. Yeah, it was very emotionally exhausting, I’d say. Cause, you know, I missed home and all the things I was used to and you know, making friends was hard. But I always like try to do things on my own so that wasn’t really tough.

But it was just hard because you don’t have anyone else who’s really---worried, like genuinely worried about you, you know? It’s just…People don’t really ask you if you’re okay. If you’re…you know. Like people that were genuinely concerned were very…. I felt like I didn’t have a lot of people who were genuinely concerned about me and I had, you know, you have so many problems that you go through and like there isn’t anyone who genuinely wants to help you out or solve those problems.

So, you know, so it’s just that idea of me just missing my parents and having those problems when you really need someone to talk to and someone to like advise you and stuff and you just don’t have that. So it was…yeah….it wasn’t as tough as it would have been, but it was pretty tough.

I think the education part of it was really nice and, but it was a lot of work and it was overwhelming too.

It’s really (laughter) she know about it. (laughter). But I mean, to be honest, overly I am more grateful and happy than anything else. Cause I think I finally adjusted and made a lot of friends and I know what to do and I know my place. So that’s better and I think I’m more comfortable and you know, starting to sit down and sort of make out my plan for my life and work towards that. So…eh.