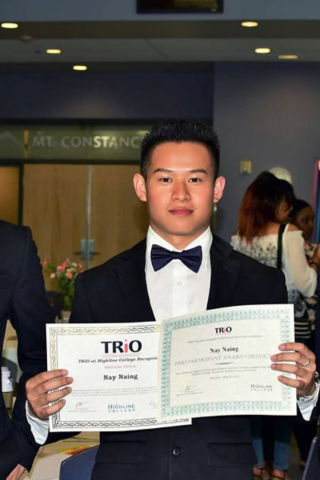 
Nay Win Naing is an immigrant from Burma. Nay’s parents fled Burma due to civil war to refugee camp in Thailand. Nay was born in that refugee camp and spent the first 13 years of his life there. At the camp Nay and his family endured great poverty, and struggle. At the camp refugees were supplied food from the United Nations, however no formal education was supplied. When Nay arrived in the U.S. he was blown away by the infrastructure and opportunities provided “It was like a dream” said Win Naing.

Nay struggled at first with the language barrier and making friends however over time things improved. Nay graduated from Kent-Meridian High School, followed by 2 years at Highline College where he earned his AA. He currently attends the University of Washington in Seattle and is excited at the prospects of starting his life.


Hello, my name is Nay Win Naing. I am from Burma but I was born in Thailand refugee camp. I lived in a village in Burma where the military group came and they would do whatever they want. So my family had no choice, so we had to flee to Thailand, which is on the border of Burma. I lived there for 13 years, and then I finally got a chance to come here to the United States, through a process run by the United Nations.

It was really tough living in the refugee camp, there is no jobs or no other way to make money. We live in the camp and all we see is house built with bamboo from the woods and there is no education, so you pretty much learn nothing. So once I got here to the United States and saw different environments, it was like a dream. And when I first stepped foot in school here at 13 years old in Middle School, I could see a lot of opportunities for my future. It was like darkness had turned to light.

There was a lot of struggles however, I didn’t know how to speak the language here, English. I didn’t understand what other people would say to me. Sometimes people would make fun of me whenever I spoke, even if it was within my own ethnic group. They would kind of try to judge me. I would feel really bad, it was kind of offending, almost like they were being racist. I got a lot of help however from the (Family & Burmese) Community which supports me through my education. It got better, I made friends and now I feel really happy, my parents are proud of me and I’m ready to go out into the world and do what I want to do in life!