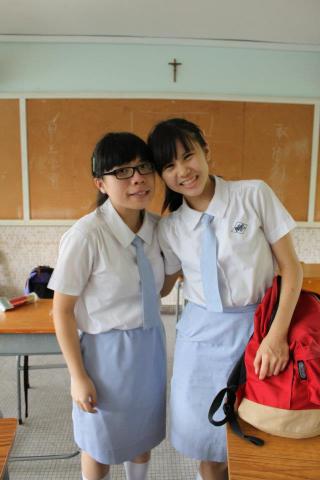 
The first impression was: old. ‘Cuz, I expect everything in the States as very new and that’s what I saw in the movie. But, when I first land to the L.A airport everything looked so old. I took a flight from L.A to San Diego. And the flight was very small, and everything was very old, the plane was so old and small. Yeah, that’s my first impression. When I met my host family, I was so shocked. I was so shocked by how they gave me their handshake and the hug. I don’t watch much American TV and I don’t…I barely listen American music. So, I feel like I don’t have a connection with my American friends when I went to high school. So, when they were talking about…what show they watched last night...I just cant make a step in the conversation. So, I tried to meet someone that have the similar background that I do. There was a guy also come from Hong Kong. And I met him, I become friends with him…and he introduced a lot of his friends to me. My advice to other international students is: don’t think too positive to all American things. You still need to work very hard to get your degree. I think, coming to the United States give me more exposure, give me more connection with other people from other countries. And, it helps to me to build my network and also my career development.