"Everything that I saw I compared to India. It was something, a different world altogether." 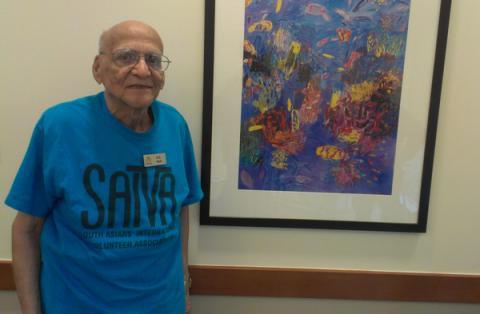 
I had a very great desire right from my school days to visit and go to the U.S. sometime. And when I was in the service, I was granted a visit to the U.S. on some technical mission. But somehow, it failed. The finance department did not [???] while the department nominated me. So I was [stuck]. So I was trying all the time that I must go to the U.S. somehow. I could not get any chance, and as luck would have it my son came to the U.S., and he got a job. He was a computer engineer, electrical, telecommunications, computers in India, so he was given a job by some [??] firms. So he designed, actually, or he left TCS to join that company. Had he continued in TCS, he would have been [on top?]. While in India, in the U.S., the economy has gone down, in India it is booming. So, it is all luck. So, when he joined here, in that firm, I don’t know, it was some company by the name of M, but I can’t pronounce and I can’t remember it. So he was working with that company at Harrisburg. And so I came to Harrisburg to stay with him, to have a [go] at the U.S. as per his convenience. And he took us to as many places as he can, in North America, right up to San Francisco, and Alaska, and all those places. And we probably were going around for about 6 months, I had a 6 months visa, so we had only been in [??], all the 6 months going place to place, and it was great fun. And I came here for the first time, and it was very exciting, and very thrilling for me to have seen all those places and all those buildings. Everything that I saw I compared to India. It was something, a different world altogether. And we’re very excited and really liked everything very much.

You said that growing up, you always wanted to come to the U.S…

Oh yes! Because you were hearing stories about the U.S., seeing pictures, hearing stories, meeting people, Indian people who had been to the U.S. and back, and were back there and were telling all about how it looked to be a fantasy and everything; it is a second world and a different world and a [complete] and probably maybe more [real?] heaven than anything else. We were thinking in those [??] that if you go to stay in the U.S. probably you’re never going to the heaven...on the earth.