First Days Project
My name is Kety B.
INTERVIEWED BY Hannah Coffaro 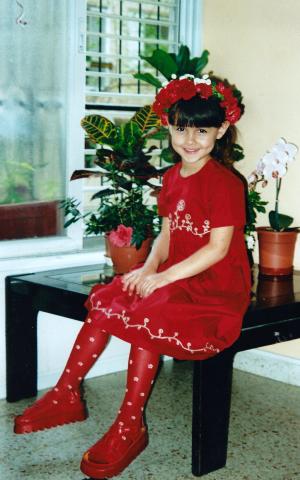 
My name is Kety. I moved to the United States when I was 10 years old from Israel. I don’t really recall my first day here. It’s kind of a hazy time period. But, I do remember that I was very jet-lagged. And, I remember waking up during the nighttime here because it would be daytime over there.

Where did you land?
And..I landed in Seattle..and I moved to Bellevue for two months. My Dad was working for Microsoft, that’s why we moved. And we got an apartment, just for the first two months, so that we could settle in and find a house…a more permanent location later on. I remember thinking that the apartment was very nice and the environment was definitely different. It was colder and wetter. And, I came from a very desert-y kinda location. I remember being surprised at how grey and rainy it was. And…I was waiting for my parents to get all checked in to this temporary apartment with my siblings. And then we went straight to bed and I woke up in the middle of the night and my Dad’s cousin was over, who lives in the United States, the only other family member that lives here (everyone else lives abroad). And he ordered us pizza. And the pizza had meat on it. Which, I was not used to because, in Israel, everything is Kosher. So all the pizza had...you couldn’t mix cheese with meat. So, that was really weird. And, it was like a bunch of meat. It was like sausage and beef and whatever…I don’t even know. There was a lot of meat on there and that was weird. And then, there was another pizza and it had Oreos on top of it. And I’ve never seen pizza with Oreos or any type of dessert on it before so, that was strange. I remember not really liking it and thinking that it was really weird to have dessert pizza. And I remember my parents and my Dad’s cousin talking in the kitchen. And I was pretty excited…but also kinda nervous because I didn’t know a lick of English. I knew only the ABCs. And I…my parents and my Dad’s cousin were talking in Russian, so that was understandable. But, I was pretty nervous to start school…but I do remember being really excited about the school bus. And I was really excited about school lunches. [Laughs]. Because we didn’t have that in Israel. You walked everywhere and you brought your own lunch. So I was really excited to have a cafeteria and like go on a school bus with all the kids like I saw in the movies.