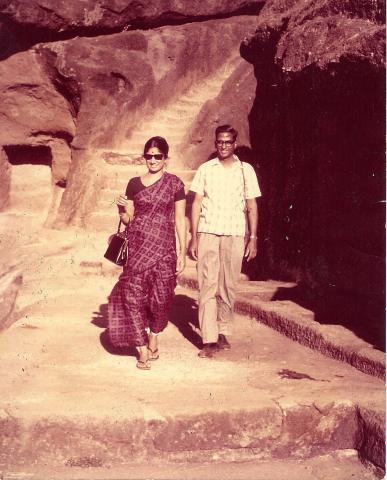 
I am Lakshmi Jayaraman. I started my journey to come to America in Calcutta on July 29th, 1960, by boat. We reached New York on September 5th, after one month and seven days. People were waiting to open our bags and very good to me. They asked me whether to do everything, and were good to us. We stayed with our friend in New York, Dr. Desai, for two days. Then we went to Tallahassee. We stayed in Tallahassee for about a year, and then went to Boston for a year, and then six months in Switzerland. At Tallahassee, everything was so different and very striking. I could not take it for a while, I couldn’t explain how I was feeling. I could not accept it at first but slowly I did. People were very good, the neighbors were very good and nice. No Indian things, not even rice were available. Dal, nothing. We used to get dal from New York, a shopkeeper. We used a send him a letter and he would send a kilo of toor dal. That I would use for weeks and months. Nothing else was available, not even yogurt. I used to make yogurt out of lemon and milk, somehow. Those times, in Florida, there was segregation. In the gardens, anywhere you sit, it would be written, “whites only, blacks only.” That made me feel very bad. When we came to Boston, segregation was not there. Well, it was there but not as serious as in Florida. People were treated very differently. Then we came to Switzerland and stayed there for six months. I fully enjoyed the trip to America, though at the beginning I could not take it. I understood the people and they were very good. Boston was definitely better than Florida, because I knew more people. Then after Switzerland, we came back to India. In 1984, we came to America again. I am here, my children are here, my grandchildren and great grandchildren are here. My lovely granddaughter is interviewing me. Thank you very much, and have a good day.