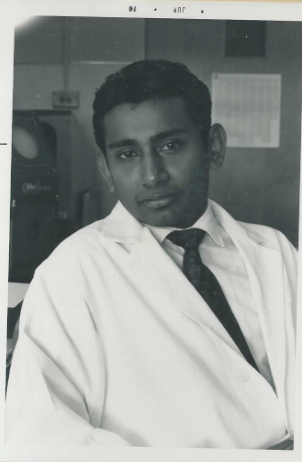 From Jamnagar to JFK

“This is my home, now.” Coming from a town in West India to the United States of America, Gulab Shah, considers America his home. While in medical school in Mumbai, India, Gulab saw some of his classmates studying for an exam, so he inquired what it was for. His friends told him that it was an exam they were required to take if they wanted to study in America. Gulab made the decision to take it, and when he passed, he decided to pursue higher education in America.

Before he left India, he went back to his home village of Jamnagar in Gujarat, a state of India. Gulab says that his family was both happy and supportive of his decision to travel to America. “I wasn’t going to be homesick because I was really excited about the new adventure,” Gulab remembers. “It was a little sad when I left Mumbai because I was leaving lots of friends, who I had spent many years in med school with. So many people came to the airport to say goodbye.”

This journey from Mumbai to New York was the first time Gulab had flown. He boarded an Air India flight from Mumbai to Paris, that briefly stopped in Beirut for fuel. It was a jet plane with a very loud engine. “I saw the flames come out of the jet plane. I kept on worrying that the plane was going to crash. I was so embarrassed to ask anybody, because I didn’t know if it was normal, but it went on for hours, so I assumed it was,” Gulab notes. From Paris, Gulab flew on Trans World Airline to New York City. He was sitting next to a gentleman, who was a scientist at John Hopkins, returning from India. “I didn’t have many problems because the hospital was going to provide a place to stay and food, but it was nice to talk to somebody, as I was coming closer to America, because I had questions.”

A memory that will stick in Gulab’s mind forever is his first view of America as he landed at JFK International airport. “The plane was flying over rows and rows of houses, and there was snow on the ground. It was the first time I had seen snow. I was awestruck by the sight of coming down to JFK. I still remember it so vividly.” His plane touched down at around 4:00 in the afternoon on Thanksgiving Thursday in November.

“One of my friends, who I knew from India, was living in New York, so he came to pick me up at the airport. I didn’t have any warm clothes, so he took me to this store, Robert Hall, which was open on Thanksgiving, and I went with him to buy a coat and gloves.” Because it was the end of November, the weather was “cold and gloomy”, but Gulab says that it was comforting to have somebody who he knew. “The next morning, my friend dropped me off at the airport to go to Pittsburgh for my internship.” The ride to the hospital in McKeesport, Pennsylvania (just outside Pittsburgh) was nice because the hospital had sent a driver to the airport to pick him up. “I thought that was a nice welcome, very pleasant, and made me excited to be here.”

“The next day, Friday, I met program director, Dr. McLenahan.” It was Gulab’s first day at the hospital and he was asked to do an admission history and physical on one of the patients Dr. McLenahan had admitted for hernia surgery. “I did it the way I was trained in India, and he was very impressed by it,” Gulab explains, “I did not have any problem being put to work even though I was not supposed to start until December 1.”

Gulab remembers the hospital being very nice. He had a room on the 7th floor of the hospital that he shared with other first-year residents. There was a kitchen, food, and maid service. “In the winter there was snow on the ground of the hospital, and I loved it because I had never seen snow.” There was a window at the back of Gulab’s room that looked over a cemetery. “I didn’t like to see those tombstones. That was always scary. I kept on worrying about ghosts and stuff; I don’t know why, but I didn’t like to see that in my back window.” The other side of his room looked over the River Monongahela and the many steel mills that furiously pumped out smoke. Gulab says, “To me it was still so beautiful because I had not seen something like this.”

“I came here and I knew English, but I did not know much else. I was very naive,” Gulab recalls. The people of Mckeesport Hospital were very friendly, nice, and helpful to not only Gulab, but to the rest of the interns, as well. “One of the telephone operators, Kay, would invite me and the other interns over to her house. It was like our home. Kay’s mother treated us like her own children. It was really fantastic. They made me feel at home.” Gulab says that he never felt at a disadvantage for being from India. “People didn’t ask insulting questions and even if they did ask some questions, which were probably out of ignorance, it didn’t bother me. I just thought people didn’t know about the country.” During his internship in Pittsburgh, Gulab had an overall great time because the people appreciated his work, and he progressed well. “I just was recognized for what I was able to do.” From McKeesport Hospital in Pennsylvania, Gulab went to Bellevue Hospital in New York City for his residency. In his first year of residency, the chairman of the department made him the resident in charge of diagnostic radiology. Gulab recalls his teachers being very nice to him. “That’s what I liked about America: if you have potential, you can achieve success and do well. You will be recognized for what you are, and you don’t have to fight bureaucracy and seniority system.”

Gulab came exactly one week after President Kennedy was assassinated. “He was my hero. When I was in India, I thought so much of him,” Gulab remarked, “Even a week after the assassination, the country was just shell-shocked, and I could feel it, too.” Arriving in the conservative city of Pittsburgh, Gulab heard people slander President Kennedy and his wife. “I couldn’t believe it. I had just grown up in a newly independent India where we respected our national leaders. I was surprised that people would say something derogatory about a president who was just assassinated.” On a bus ride from Pittsburgh to New York, Gulab remembers a conversation with another young man about the American political system. “In India, the party platform system was very stark. Here, when I was asking the gentlemen about politics, I couldn’t understand the difference between the Democrats and Republicans, and he couldn’t answer many of my questions.” Gulab says that it took him many years of being in the country for him to understand. “In the Bellevue hospital the other young residents and I would stay up late in the cafeteria talking about politics. With the Vietnam War in full force, the American interns were afraid of being drafted. I was surprised to see how open society was with the TV shows, the newspapers, and people talking about government and politics. I could see how vibrant the democracy is here in this country. People were able to express themselves, even though they could not directly control what was happening, just the ability to be able to talk and have the freedom in the country was remarkable.”

Gulab Shah is an inspiration to all because he took a leap of faith and left all that he knew to come to America. “I never really felt homesick, like some other people might feel, because America became my home.”

This is the link to a video that Gulab's grandchildren made in 2013 to commemorate his 50th anniversary of arriving in America. https://www.youtube.com/watch?v=mMBDeEf_Z-c