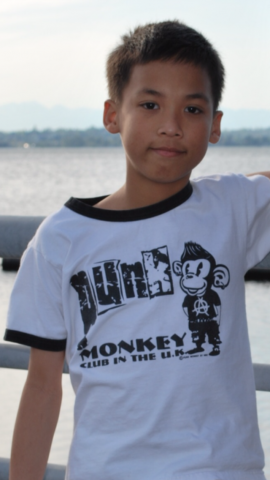 
Lam’s dad immigrated to the United States in the ’90s to chase his American Dream. His dad lived here in Seattle for a couple decades to establish himself before bringing his family, whom he left in Vietnam, in 2008. Lam, his mom, and his five other siblings’ lives changed the moment they stepped foot on American soil; they knew that there was no going back.

Lam and his family arrived at Sea-Tac airport around 7 p.m. that night. He remembers at least 20 relatives ecstatically greeting him at the airport. He said, “They were so excited and happy that we arrived, and I was like, ‘ok’” — read ok in a small cheeky voice. Although tired from the flight, they wanted to celebrate, and the first place they went to was a buffet in Northgate. It was a quiet car ride, but he didn’t really notice because he was too entranced looking at the city lights that lit up the dark sky. Lam’s favorite food to eat back home was crab, and of course, that was the first thing he ate in America as well.


Um. I cried a lot. I really missed my family in Vietnam. Coming into a land that I’ve never been to, the people were just different than the people I y’know interact with when I was little. I came to Seattle when I was 12 years old. I came here without really knowing any English word. I was pretty shy back then [when I first came to America]. I’m scared that I might not be understood or the way I speak might not make sense. I felt like I’m just in another world on my own. I left a lot of friends, families, neighbors. And I called home to my family in Vietnam, and I was telling them how scared I am and how I felt, and they gave me a lot of words of encouragement. They said, “Everything will be OK. You just have to work towards it. You will overcome this language barrier eventually. Just set your mind to it and work hard.” I spent like four nights crying, because I just felt so isolated from the real world. I did sleep a little bit and then I woke up around 3 or 4 a.m. and I started crying. I dreamt about my aunt and uncle. They were telling me they miss me, and they want me to come back. And they brought me my favorite noodle soup, and I- I just couldn’t resist. And then, I woke up and I realized it was just a dream. I think I woke everyone in the family up because me and my brother were crying—well I started crying and then my brother y’know followed through. So, yeah, it was like a crying kind of night (soft chuckle). The funny thing that I saw was how clean the road was. Because in Vietnam, the roads were pretty dirty. And, you know, The houses was nice, the environment was quieter, but it was just not the same. Like, where I used to live, ‘cause I lived in a noisy city. Even at night time at 11 p.m. there would still be a lot of people outside, talking, socializing, playing games, but here after like 9 p.m. it’s almost like quiet time for the neighborhood. I would immigrate here as someone younger, not older, because I would less of a language barrier because about second or third grade, that’s when students are really starting to learn English, and if I come earlier, I would have learned English much more, and I would be able to adapt to the culture much more efficient.