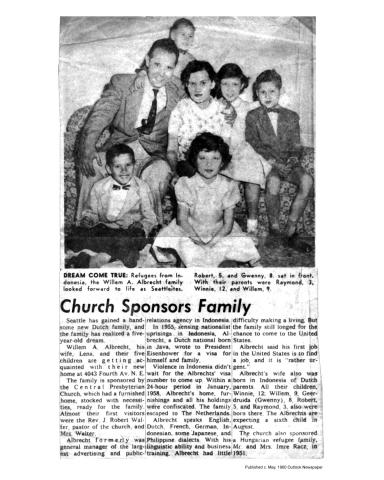 
We left on the third of March and got here around the fourteenth or fifteenth. We didn’t leave Indonesia by choice. We were pretty much exiled because we were asked to not claim citizenship of either the Netherlands or Indonesia, and my dad was always more Dutch than Indo.

So he claimed Dutch citizenship, and they pretty much deported everybody that was Dutch. We left with a few steamer trunks and moved to Holland.

Amazing enough, I recall coming into New York City, and it was during the day because I distinctly remember seeing the Statue of Liberty. And we were in total awe, you know, that, ‘Hey, we’re here.’

We pretty much went in the ship, through customs, immigration, then to the train station. And the train station, I felt, was really dark and dingy. It scared the shit out of me. You know, it was huge!

That’s the only way I can describe New York City. I mean, it’s just all this noise and all this activities. Well, the U.S. is a melting pot, say. New York City is a port that is its own melting pot. It really is. And having been here for an x number of years, and learning U.S. history and all that, it just cements that idea.

There are all these different languages being spoken. There was the street noise. There was the noise of the people in the terminal building where we docked.

Out on the street, it was just gas, urine, tobacco, smoke. A lot of that was wafting through the air. It was chaotic din is how I would describe it. Everybody not sure what the process is, knowing they had to go through some sort of process and trying to discover what that process was.

It was chaotic din. Everybody’s trying to find their place and move on.