"I was married recently and I had just moved here without my wife. She couldn’t get a visa and being apart thousands of miles wasn't worth all that much to me." 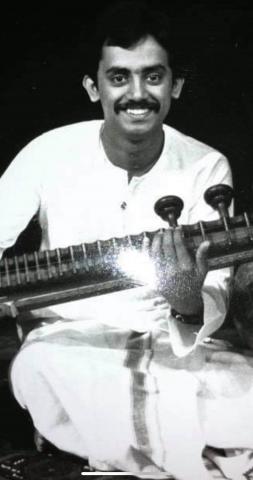 I remember coming in from Madras for the first time to San Diego, California. It was a fairly cold time. I landed late at night and missed all the flights to Los Angeles. I tagged along with the few friends who traveled with me and we walked down the long hallways of the domestic terminals. It was empty. We missed all the flights and took a rental car and drove for the night. Definitely not the most welcoming experience to a brand-new country, but it was a real fun experience

I traveled across the world for many experiences and projects and it was music that brought me to the US. My thirst for knowledge and new ideas pushed me to be where I am now. I had just finished my masters degree at the University of Madras. In my graduating year I was working on a project sponsored by the Smithsonian Institution related to the study of music. It was a wonderful opportunity given by them which made me come here. Later, I went on to study piano performance and “Western Music Theory” at the Trinity College of Music, in London. I was introduced to the late Dr. Robert E. Brown who is known to be the one who coined the term “world music”. I remember his motivation and inspirational experiences made me go on to study Ethnomusicology and obtain my second master’s degree in Ethnomusicology from San Diego State University focusing on music of Java and Bali.

Who met you when you arrived?

The San Diego State Music Department people, who were part of the Smithsonian project, welcomed me when I arrived at San Diego, but a few others tagged along from Los Angeles who had helped me drive through LA to San Diego late that night.

It was different. I just wanted to go back home once I got here. I was married recently and I had just moved here without my wife. She couldn’t get a visa and being apart thousands of miles wasn't worth all that much to me. I tried not to look into America in a deeper sense throughout that period.

How hard was it to adjust to life in the U.S compared to the time you’ve been staying in India?

The schooling system in India was a lot more conservative than here. For example, there was no such thing as “quarter notes” or “half notes”. Those words were so alien to me when I first started here. The early times were focused more on the history of “western music” and we had a Russian teacher who’s accent was something that I never could understand. This made it harder as I then used to record each of his class, take it home and work through each lesson on my own. Then came the idea of a “quiz”. I remember the first time I stumbled upon one. It was a vaguely fun experience. Through all this, life went on and it was an experience that helped me grow. The cultural experience made me realize the wide variety of people around me, but made me sure to never leave my roots behind.

How difficult or easy was it to establish a music school here? The exposure it needed during those times…

It was definitely the music in me that got me connected to the Indian communities across San Diego. It attracted a lot more people who wanted to listen to my music. I was well aware of the challenges involved in teaching Carnatic music to students being raised in North America. In order to excite them, I explored new avenues and perspectives towards a new genre of Carnatic music played on the electronic keyboard. This idea of genre was purely based on changing the trend of music but not the style and traditional values that stick with it.

One thing America has given to any immigrant who has arrived in this country is a prosperous life with an abundance of opportunities in hand. I think one of the most important things to acknowledge is the idea of contributing what we can share with this country, without forgetting where we came from. As you get a-cultured to a new culture, always hold onto your roots and culture and cherish and be proud of the same.