"Landing in New York was something totally different – the huge skyscrapers, the ‘hustle and bustle,’ the speed of life was like a totally different world opening up to us when compared to London or pre-partition India." 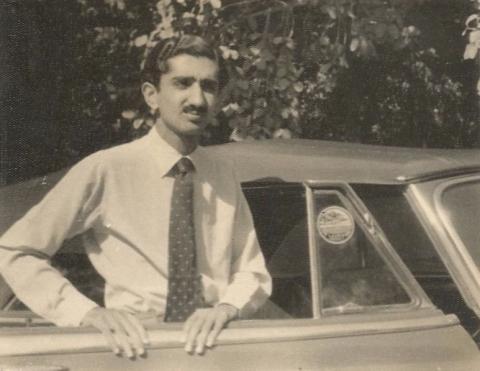 Our ‘First Day’ in the US was, in actual fact, physical arrival in New York from London en route to San Francisco, our final destination. My impression of the US before our arrival had primarily come from movies, from the news media and from Indian and English friends. It was that the US was a ‘tough jungle’, that Americans were eager to make money at any opportunity and generally did not welcome foreigners from South and East Asia. So I arrived in the US with some apprehensions, although we had also been told that the US was a varied land of considerable opportunity and space.

Landing in New York was something totally different – the huge skyscrapers, the ‘hustle and bustle,’ the speed of life was like a totally different world opening up to us when compared to London or pre-partition India. I remember one incident: from our hotel in Manhattan, we took a short cab ride to our travel agency, which turned out to be the size of a city block. After alighting from the taxi, the cab driver took the fare and then looked at me earnestly and said ‘Next time you can easily walk over here from your hotel; you don’t need to take a cab.’ I was surprised by this starkly straightforward and honest remark.

We proceeded to San Francisco from New York by train, stopping over briefly in Chicago. In those days, the cross-country US trains were very elegant, with highly modern ‘observation’ cars that allowed us to look at the American country side first-hand. We saw the northeastern states, the mid-west with its agrarian plains, and then a bit of what I thought might be the ‘wild west’ as we crossed states such as Colorado and New Mexico on our way to San Francisco. This was a great big country, beautiful in diversity of landscape.

Everywhere we went, locals were friendly and gracious. There seemed to be no prejudice, even in the ‘Southern’ city of New Orleans. Interestingly enough, at that time, local residents seemed to consider us as Caucasians or ‘White’. While separation of African Americans was clear enough, segregation did not seem to extend to visitors such as ourselves. People seemed curious and interested about South and East Asia. When both our children were eventually born in San Francisco, we received certificates of welcome from the Mayor. I remember even the local passport agency staff was welcoming and accommodating when I went to apply for US passports for each of my children. I seem to recall that only 100 Indians per year were allowed to settle in the US. In fact, in those days, it was rare to see South Asians in cities such as San Francisco, Chicago or New York.

At that time, I remember meeting an Indian living in San Francisco. This gentleman had identified a group of Punjabis living in and around Sacramento whom he thought we should meet. So my wife and I traveled to Sacramento and met several Punjabi families of various faiths who had settled there. One Punjabi, in particular, became a good friend and support later. He was in some respects quite remarkable, having come illegally to the US by boat in the 1920s as a teenager and completely illiterate. He had managed to remain in the US, eventually marrying a Mexican lady. He worked as a laborer and hired hand over the next several decades, saving money and eventually purchasing a rice farm near Chico (not far from Sacramento) after Indians were allowed to own land in California. He became a millionaire by the late 1950s. Despite significant prejudice, he had managed to succeed in the US. And there were other resourceful Punjabis we met who had settled in and around Sacramento, and a handful in the Bay Area of San Francisco, who had through hard – work, determination and luck also prospered despite the serious hardships they faced.

At the birth of our first child, our budget was limited. My wife’s doctor, a prominent physician at San Francisco Hospital (who had also been one of the developers of the ‘Pap Smear’) noted our long journey from the sub-continent and refused to take any fees. We ended up giving the doctor and his wife a gift but he continued to refuse to take any professional fees. Such was the hospitality of Americans in those days. My wife’s doctor invited us to his home, and we met his wife and family. And we remained friends for a long time thereafter.

My ‘First Day’, or more correctly, ‘First Days’ in the US, showed me a country that was vast, generally welcoming and seemingly full of opportunity. In the early 1950’s (before we became immigrants almost two decades later), we made friendships readily. It was a few of those friendships that became critically important for us some years later, particularly one connection that eventually helped me to enter graduate school in Chicago and assisted both myself and my wife in securing our first professional jobs.

What I found inspiring about the US was the desire of Americans to reach out and help others, along with their attitudes of self-reliance and hard work. Today, sadly, it seems that increasingly the ‘right’ connections or networks are critical to achieve economic success in the US – something that at one time only characterized the ‘Old World’ of Europe and elsewhere. But I have no regrets and am glad I made the decision to settle in the US.