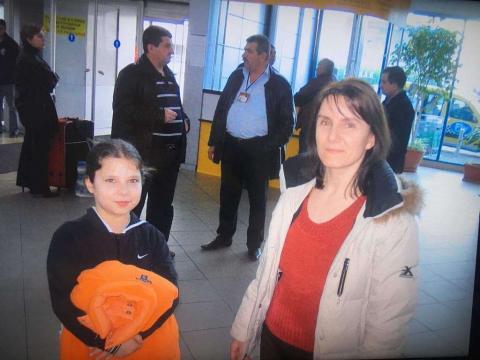 
Patricia Ambrus arrived to Seattle, Washington from Caransebe,s, Romania in 2007. A third grade student, at ten years old, Patricia was reluctant but excited to move to a new country with her brother and her parents.

After having a difficult time integrating into U.S. culture, Patricia and her family decided to move back to Romania. Patricia struggled with not just the language barrier but in finding a community that she could be a part of. In Romania, she had been part of a Judo team and felt close to other people, but moving to the U.S. isolated her from that sense of companionship. Her parents felt the same way, going from being known in their community, to feeling like “nobodies” in a new country.

When Patricia was in seventh grade, she and her family returned to the U.S., this time arriving in Texas. It seemed the second time was the charm. Patricia and her family have been in the U.S. ever since.

Now, Patricia is a student at the University of Washington, earning her Bachelor of Science in industrial and systems engineering.


My name is Patricia Ambrus, I am 22 years old. I go to University of Washington, Seattle and I am studying industrial and systems engineering.

I came here in 2007, I think I was ten or eleven years old at the time. I came from Caransebe,s in Romania, it’s a really small town. I first came to Seattle.

I remember the drive home from the airport, my uncle picked my family up and we drove to like the neighborhood where he lived and the houses didn’t have fences and that was very weird to me. And also, they were made out of wood and in Romania they are made out of bricks so it to me it felt like, if you kick it hard enough, it might fall over so it was – it was just strange.

I think one weird part was how your neighbors or just people around you will just be like, “hey what’s up?” or like “how’s it going?” but they don’t actually expect you to answer, it’s kind of just a greeting. Everybody comes home from work, they go to their house. And I was used to you talk to your neighbors like if you see them on the outside, you’re there for at least a half an hour, just talking back and forth. I was a little bit shocked about like how people keep the distance with their neighbors but also I didn’t speak English, so I wasn’t surprised that people didn’t try to talk at first.

I remember when I started school people would come up to me and they would like ask where I am from, obviously, the new random girl. And I didn’t really know words besides simple things like yes, no, cat, dog, house, stuff like that, so I didn’t know how to hold a conversation which was really hard in terms of doing school work. A lot of times teachers would ask me to do stuff and I didn’t understand but the problem was that I didn’t know how to say, “I don’t understand.”

I was good at math problems because I didn’t need to speak English for that but doing the reading, I would be super slow and I didn’t know how to read and then the teacher would sometimes get frustrated like, “oh you know this,” because I passed the ESL test which is a test they first gave me when I came here. I think I passed it because it was written so it was easy to recognize words but I couldn’t actually speak it.

I couldn’t integrate well with the people and I didn’t have sports anymore, I didn’t have a team to like go and talk to. I was like only going to school and the people at school I couldn’t really interact with or talk to. So then that kind of left me with just my cousins that I was living with and they also didn’t speak Romanian so that didn’t help much. I just didn’t have people to like hang out with or spend time with.