"Yes, I'm glad I was able to come to this country, it’s the land of opportunity, and I have progressed in my profession, much higher and better than I thought." 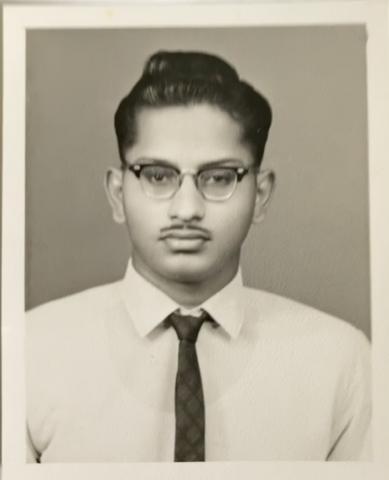 And, which city and country were you living in before you came to the US?

Now it is called Chennai, it used to be known as Madras City in South India.

And where do you live now?

I live in a city called Bellaire, Texas, surrounded by Houston.

Okay, thank you. So first, what brought you to the United States?

When I was in high school, we used to get a lot of magazines and reports. I used to go to the United States Information Service, USIS, and read about American journals and magazines. We used to get the newspaper for the American Embassy called American Reporter, and I started reading about it. I was fascinated by the United States. And when I became a doctor, in 1965, for the first time since 1924, [the US] relaxed the immigration rules for foreigners; previously only people of European descent could come to America. In 1965, it opened the visa system, and there is an examination called [Educational Commission for Foreign Medical Graduates] for foreign graduates, and if you pass the exam, you get a temporary visa, and you get employment in an American hospital. So when I passed my MD in 1970, along with two other doctors, we decided to come to the United States. There was an opportunity awaiting us, and there was a need for doctors also. So that's why I decided to come to America. And I always wanted to be a doctor, and the United States offered me a challenge, or an opportunity.

Well, we left Chennai which used to be known as Madras City, by Indian Airlines, landed in Bombay, along with two of my friends and their wives, we switched over to Trans World Airlines, which is no longer existing, and we went via Tehran, Athens, Frankfurt, Tel Aviv, and we reached the United States evening of June 29, 1970.

Who met you, if anyone, when you first arrived?

When we landed in Buffalo, there was a person by the name of Dr. Gopalakrishnan, he was an emergency room physician when I was a student. I wrote to him, and he was good enough to meet me and took us in his private car to our temporary quarters in Buffalo, New York’s Mercy Hospital.

Before we got our permanent headquarters, it was summer vacation, and believe it or not, they put us up in the nurses’ quarters, because the nurses were on vacation. So they gave me a small room since I was single, like a hotel room, half the size of a Holiday Inn room, and it was a bedroom and a bathroom, and we had to walk across the hallway and into the hospital building to eat in the cafeteria. So eight o'clock in the evening, I was so tired, I ate something in the cafeteria and I went to sleep, and the next day morning, I had to go to the hospital to introduce myself, get a name badge and a uniform and get to know the people.

What were some of the biggest learning experiences you had when you came to the US?

A learning experience was, you know, of course, the first couple of years were very busy, you go in the morning, work, and in the evening, come back, and you're on call. So you are on call every other day or every third day, and since I was alone, I ended up eating breakfast, lunch and dinner in the hospital cafeteria, And then, for the first time in my life, I got to know how to use a washing machine and a dryer. The whole system was a little bit different than what I was used to. A couple of Indian friends and I went around shopping. So everything was a new experience, including the way you live, how you greet, for example, in America, you don't call nurses “sisters.” In India and other parts of the world you call a nurse “sister,” here you call by their first name, and in India we call our doctors, “Sir.” They don't like to be called, “Sir,” they want you [to address them] by their name, “Dr. so and so.” And the way you speak, their manners, everything was different.

What was your favorite part of being in America?

First of all, the freedom to do what you want, the chance to promote yourself, and you can reach any career you want to achieve. I wanted to be a kidney specialist, for example, then I decided to do a pulmonary fellowship, and in India and other parts of the world, I could not have advanced further in my career. So after I finished my fellowship I got married, and we moved from Buffalo. I was a physician in the [Veterans Affairs] hospital, then I became a private attending. And I was very proud to be a private doctor and I retired after 30 years. So basically I achieved what I wanted to achieve. Along with the reward of being a private practitioner and being able to treat patients, it is a financial reward of being a doctor, and I was able to support my parents financially too, and of course travels and things that I could not afford if I were in India. The whole American system of treatment and medical care was different; you have to keep up with the advances in medicine, unlike in India, where once you get your MBBS or MD, you have no incentive to progress.

Knowing what you know now, what advice would you give to a new immigrant coming from India to America today?

Well, when we came, we had opportunities which don’t now exist. Number one, there was a shortage of doctors. Number two, the Vietnam War was going on, they were drafting doctors. And thirdly, the change in immigration, so there was a sudden surge from foreigners to come to this country. Right now, talking from my perspective, they have enough doctors in this country, so they don't need any foreign doctors, and they have put a lot of hurdles in the way. For people who want to be scientifically talented, who want to do research, they can still come, there's an opportunity, but the previous (45th) president tried to put obstacles on even legal immigration. If you’re a physician, you just still come, but you have to take a three part examination, and the opportunities are few and far between unless you are an academic doctor and even that'll be difficult.

And overall are you glad that you immigrated to the US?

Yes, I'm glad I was able to come to this country, it’s the land of opportunity, and I have progressed in my profession, much higher and better than I thought. It was financially rewarding, I was able to support family, travel extensively, and therefore I'm pretty happy. Some of my classmates have gone back to India for different reasons, and I see them every year when I go back to India. They are also happy in a different way. So it depends on what you want in life.