"When he came out, he gave me a little booklet, 'Welcome to the United States.' I still remember that, this old fellow. It was a wonderful feeling." 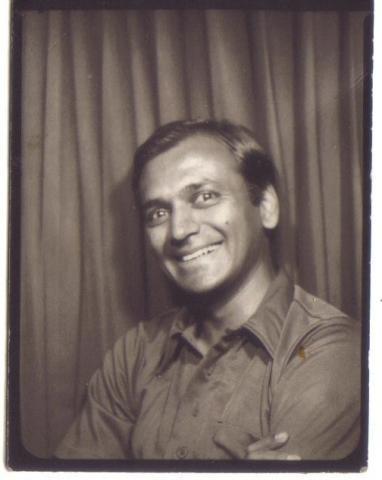 I was happy that after a lot of struggle and immigration paperwork, and going from Ahmedabad to Bombay so many times to make sure that everything goes right, that I finally was on my way. I had done a little correspondence -- I wanted to stay with somebody, and my sister Kilbil in Bombay had made an arrangement with a family friend named Sunil Desai. He had said that he would be there, his wife Mina would be there, and their little boy would be there, so I would be able to recognize them.

While flying from Ahmedabad to Frankfurt, it was one type of environment. From Frankfurt to US, the US passengers made for a lively environment, no tight-lipped business. They were passing around all these drinks. I only had 20 dollars on hand, and Sunil Bhai had requested me to buy a bottle of Chivas Regal from the Duty Free Shop. So I only had six or eight dollars left in my pocket out of 20 dollars I started with. I was a little worried -- What if nobody shows up? How will I get a taxi? So I wasn't spending any money. Sitting beside me was a German engineer -- actually, I had a little chat with him. He learned that I don't drink alcohol and stuff like that. He gave me a little smile, and said, "That is apple juice, and it is free." Because every time the air hostess passed by with drinks, I thought it was alcohol and refused it.

When I landed I was a little worried about going through immigration, but in those days it was so nice. The guy looked at my papers and stepped away for a little while. He told me to sit there, and I was wondering what was happening. When he came out, he gave me a little booklet, "Welcome to the United States." I still remember that, this old fellow. It was a wonderful feeling.

When I got out, I saw Sunil Bhai and his family waiting for me. We drove from New York to Monmouth Junction, New Jersey. One and a half hour drive, probably. My first reaction was that there were no people on the road. I was looking around and I only had an impression of the U.S. from American and British movies. I was used to seeing the big cities -- New York, Chicago -- and also Westerns. So I never had this idea of the roads going through the countryside. It was May 29, 1974. It was May, and it was beautiful, this greenery.