" I don't remember what I ate but I remember in the airport I got a cup of tea, and that was the first time I drank a cup of tea from a tea bag. It tasted so bad, I couldn't drink it." 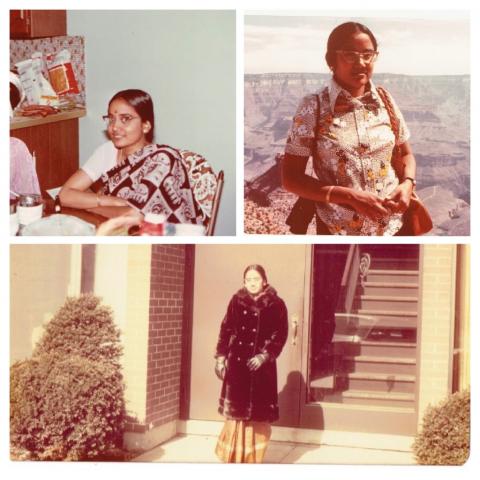 
First, what brought you to the United States?

The dream was to come to America. It was always the American dream, the land of opportunity, and I wanted to come to have a good career, make good money and [have a] good future. I got married to my husband in ‘73, and he was already working in the United States, so after I got my green card I came in 1974, January.

Coming from Madras, I came on TWA airlines, Madras to Bombay, Bombay to Tel Aviv, from there to Rome, and Rome to New York City, JFK.

Who met you when you arrived?

My husband came to New York City and met me, and we took a plane from JFK Airport to LaGuardia, and then from there we took a domestic flight to Buffalo.

When I arrived, it was midwinter and Buffalo, being in the snow belt, had a lot of snow. I had never seen snow in my entire life. I'd never lived in a cold climate. So everything was a big adjustment for me, starting with the weather and the way of life.

When I first arrived, the first thing I had to do was call my parents back in India. They did not have a phone in their house so I had to call the neighbor's house and the neighbor would call my parents and [my parents] would go to the neighbor's house to attend to the call. The phone calls were very expensive. I could barely make a three minute call because by the time they came to the neighbor's house, more than a minute was gone. And then I’d just say, “I've arrived here safely. Everything is fine.” That is all I could say. I believe it was like close to $30 a minute for a phone call, so we couldn't afford to make a phone call. No emails, only phone calls and writing letters. I don't remember what I ate but I remember in the airport I got a cup of tea, and that was the first time I drank a cup of tea from a tea bag. It tasted so bad, I couldn't drink it. I was used to brewing tea on the gas stove so it was a new experience. Going up and down the escalator in the airport was a big experience. Also, wearing sari and shoes; I’d never worn shoes in my life, I'd always worn chappals [sandals] so wearing shoes and wearing a sari, going up the escalator, all that was a new experience. We stayed in an apartment. We had an apartment, like a one bedroom apartment in the city of Buffalo, and we stayed there.

What were some of the biggest learning experiences you had in the US?

The biggest learning experience, I think, was, number one, the culture here was totally different from the culture in India. Number two, I'd never worn pants before in my life, and then came here and started wearing pants. That was a big adjustment. Number three, I had to do all the cooking, which I didn't do back home in India. Number four, I had to do all the cleaning in the house, including the toilets, which I never cleaned before I arrived in this country. And, of course, talking to the Americans, understanding their accent, was also a big problem. In India we were only used to the British accent, so understanding American accent was a big step. So those were the hurdles. And trying to apply for an internship or residency in this country, I had to take the ECFMG exam and pass the exam. I arrived here on the 13th and I believe it was exactly 10 or 12 days later I had to take the ECFMG, without any preparation. So, that was also a big step for me, to take the exam and pass the exam.

What do you think the greatest similarity between India and America was?

I don't know about similarities, I would say more differences than similarities because the society here is more open and in India we had a very protected, closed society. Maybe the similarity would be that human beings across the world are the same, human nature is the same. That is a big similarity I’ve found, after many years I realized that human beings are the same. Whether you're an American or an Indian, you have the same emotions and the same feelings. You may be expressing it differently, but feelings are still the same.

What experiences in the US did you expect and what was totally unexpected?

Well, experiences here are different in the sense that you have to work very hard. Whether it is at home or at work you have to work hard and you have to prove yourself. Basically your career is decided by how much hard work you [do], how knowledgeable you are, and how good you are in your subject. That is one thing I discovered, because in India many people use a lot of recommendations and influence and if they know some higher-ups, they will push you through and get you admission to college and things like that, which even happens today, but here you have to work for it and you have to prove yourself. So that was one thing I found was, you know, a big difference.

What advice do you think that you would give to an immigrant now and what is something that you learned from your experience that you would want to pass on to someone immigrating from India today?

I would say to anybody coming in today that it is a lot easier [now], because there is more diversity in the community these days, and people are more open minded. Back in 1982, when we applied for a job and my husband was offered a job in a small town in the state of New York, when he went for an interview they asked him, “Will your wife wear the traditional Indian dress and wear the mark on her forehead when she comes to work?” And so, I think they were not welcoming of foreigners, and they were kind of looking at us differently, coming from a different culture, and even though on their face, they are smiling and saying nice things to you, I get the feeling that they are not open to accepting you into their society. I feel that even today because even here in Texas, we are living in a very diverse neighborhood, but we only know our Indian friends and neighbors. We don't know our American neighbors, we are not friendly with our American neighbors like we are with our Indian friends in this neighborhood. So that hurdle is still there. Even if a child has been born in the USA, they still refer to you as an Indian, they don't say you are American. I think that is not easy for Americans to accept, even though they are also diverse and they have come from different European countries. There is still that racial bias system here. And not only that, but also your name, your name can tell the person whether you're coming from India or Japan or China or whatever. So they look at you as an Asian, and they're always going to say “that Asian,” “that Indian,” “that Japanese,” or “that Chinese,” you know, that thing will always be there; we will never be able to overcome that. Even though it's a diverse society and they are welcoming to a certain extent, I don't think they are 100% open.