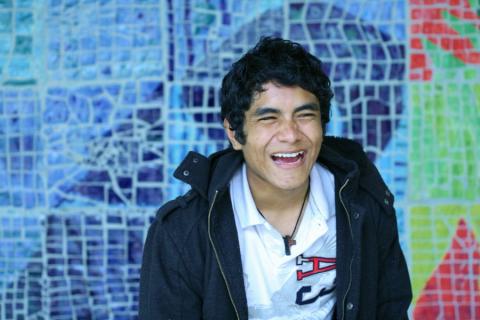 
The brick walls and painted metal lockers of the Seattle World School reverberate with voices from around the world. Students and staff laugh and call to one another in colorful accents as I am directed toward the lunchroom, where I become acquainted with a student from Nicaragua named Raul Alvarado.

Now 16, Alvarado immigrated to the United States two years ago, but has only been in Seattle for five months. Watching as he is hollered at from doorways and greeted by teachers during our migration from cafeteria to hallway to library, I can see he has made quite an impression.

In the library, a quiet place occupied by several silent students at computers and a pair playing Mancala at a nearby table, Alvarado tells me his story of looking for his older brother Tavo, who he has never met, after deplaning with family at LaGuardia Airport in New York City, New York.


“My mom was like, ‘Oh, my phone is dying. I need to charge my phone.’ I was like: ‘We can search for a plug-in and charge your phone – my, my phone so we can call Tavo.’ So we walk in the hallway trying to find one and we find one.

And right in the moment when I was plugging in the charger for my mom, I just take a look at the hallway and I see my brother walking. In that moment I didn’t know he was my brother, I just was like that person looks familiar. I think I know that person but I don’t know if uh, but I don’t know if I’m imagining this. So I just see him and he was smiling to me and I was like What a strange person, he’s smiling to me!”

So I just see my brother walking and then he talk to me. ‘Hey what’s up younger brother?’

I was like ‘Wait what, are you my brother?’

We were walking and I was like, ‘Where, where exactly we are now?’

And, so we were – when we go and we put all the bags and all of our stuff in the taxi and we were driving there, going home. I was looking to the window and looking at all the buildings and the, the streets, and the highway – which also I’d never seen a highway – in that time-moment I was, I was driving in one. So, it was really cool because everything that I see was new for me. Almost everything that I was looking at – it was new.”