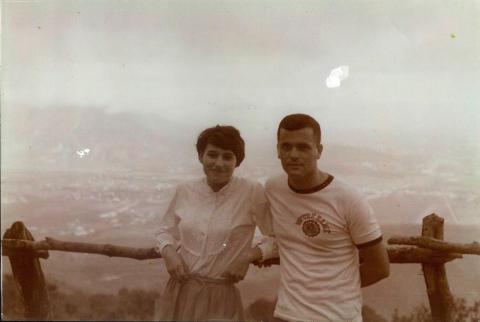 
Maria first came to the United States from Mexico and stayed with a family friend when she was fourteen years old in 1962. She adjusted easily to the American culture and her first experience was very enjoyable. She returned back to Mexico and began working for the United States Department of Agriculture. In 1968 she married an American man and moved to the state of Georgia.

The first few days of her permanent move to the United States came at a time of historical significance. The Civil Rights Act had just passed and the Vietnam War was taking place. She was welcomed by a group of women when she arrived in Georgia. The women were a support group to each other, because like Maria, their husbands were on orders to go to Vietnam. Although she dealt with some homesickness and racial stereotyping, Maria had a smooth transition into U.S. life.


I came when I was fourteen to the United States in 1962. The first experiences were, I guess, like a young person’s experience and nothing, nothing very different than where I came from in Mexico. The people were very kind and I used to once in a while go to the high school and all the students were very welcoming and very friendly, so I had a very good experience when I was there.

I was homesick for my family, and of course for Mexico, but more for my family because I come from a family of ten children. Then I came to the United States. When we were traveling north from Mexico to live in Georgia we stopped in Mississippi, Jackson, Missippi, to visit some friends of my husband, who had been working as a lawyer student in the voting rights. They were African Americans. And, so we stopped and they were very eager to show us how it was possible for them at that time to go to the Holiday Inn and nobody would tell them they were not allowed to be there. And for me that was a very shocking experience because I didn’t think that nobody was denied the opportunity to be whatever they wanted. One thing I did notice, though, when I first came here, for me it was very much a shock to be very much involved in what was happening in Vietnam and all the body bags that were coming back to the United States. A lot of the gals that I hung out with in Georgia would ask me questions if the people in Mexico have refrigerators or if I do my laundry by going to the river. That was about the extent of it.