"I didn't clearly care about fashion at that time, not that I do at this time, but those orange pants definitely just stand out." 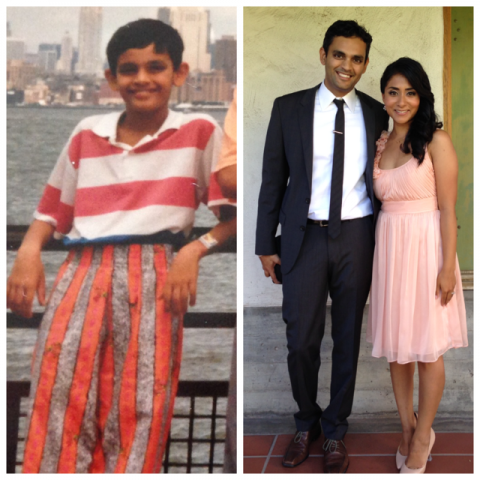 
Anita Vaidya interviews her husband, Rohan Vaidya, a Bay Area techie, about his first days in America as a middle schooler. Rohan moved from Mumbai to New Jersey via Ireland.


What was it like on the first day that you came to the United States?

Even though I don't remember the first day exactly, the first days were definitely interesting. I came into the sixth grade, that was my first day of school. It's one of my first memories. And, sixth grade kids are pretty mean. For some reason I always used to wear orange pants at that time... that my mom just dug out some pictures of.

Yes, I think you've seen those pictures and those pants. I didn't clearly care about fashion at that time, not that I do at this time, but those orange pants definitely just stand out. Even for a sixth grader. I don't know what I was thinking, just saying, "okay, that's fine, I can go to school in these orange pants." And I also had these blue sneakers that lit up at the back. I think they were New York Giants sneakers. They had a little New York Giants logo. I didn't know what American football was at that time. But the sneakers were cool and they had a light, so I thought that was cool. So I wore those to school as well. So fashion was definitely not something that helped me blend in at all.

So, what are some examples of kids being... how would they be mean to you?

So I think it's probably a lot of little things. One of the things that I remember is that during lunch break everyone has to... it's just a free for all. You can sit wherever you want. I guess this is the classic thing you see in high school movies and middle school movies, but I didn't have anyone to sit with in the beginning. So I would always kind of sit by myself and eat lunch really quickly, just so I didn't have to be there in the lunch room for too long.

Did your parents help you out in terms of helping you adjust and maybe having your back at school if there were any bullying issues or things like that?

So it's funny, because I don't think I articulated to them at all. When I would come back from school I don't think I told them what was going on or what... I was having a difficult time. I just accepted it as, this is something you have to go through.

Do you remember who your first friend was?

Hmm... I do... I think his name was Ben Meyers. He was... yeah, one of the smartest kids in our class, even in the sixth grade, and I think he was actually our valedictorian when we graduated. He was one of the friends I kinda got attached to initially in the sixth grade. We kinda continued our friendship onwards, and he actually lives here in San Francisco, in the Bay Area, now as well.

So what was different about what Ben did versus what the other kids did?

Um, what did Ben do that was different?

To maybe include you or...

Right. I think that was just exactly it. I think it was just including me. When there happens to be something in class when you have to split up into groups and do things or whether it's lunch and doing something after school. It was just about including you, including me, in these day to day activities that all friends, all people, do on a day to day basis in middle school.

So, looking back, what would you tell yourself now?