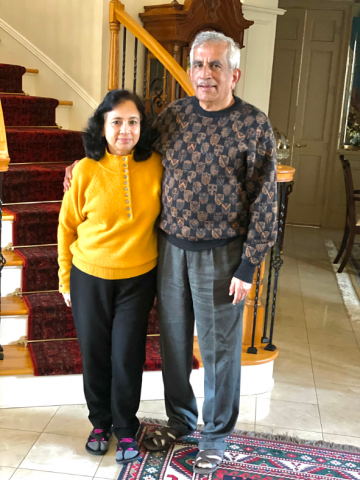 
Mrs. Raman was born in Cochin, in the southern state of Kerala in India. She got married to Jay Raman, a doctor serving in the Indian Army, and then moved to Delhi. In the 70s, she made the journey to Rochester, New York, where her husband did his residency. In 1980, she moved to Houston. She was busy raising a family with two children. In the 90s, she became part of a group of women (who were wives of the Indian doctors in Houston, known as the Auxiliary of Indian Doctors’ Association). They were involved in community service, especially involving women and children. With a few ladies from this group, she formed Daya, a hotline for women impacted by domestic violence in the South Asian Community.


Where (city and country) were you living before you came to the U.S.?
My husband and I were living in Delhi. My husband was in the Indian Army and was a medical doctor.

What caused you to migrate from your home country to the US?
Many people were migrating from India to the US in the early 70s because of the American dream - the enormous opportunity. And India of the late 20th century was not very progressive or advanced. So, many young people wanted to come to the US. Although he loved the army life, I was not particularly happy there. We were living in Delhi which was far from my hometown of Cochin. So, I felt very homesick. His family and my family were also not keen on that style of living. So, we decided to come to the US and give it a try. Our intention was to go back after a few years.

What year and where (city and state) did you arrive in the United States?
In 1975, we landed in New York City and then flew to Rochester. We had some friends in Rochester. My husband got a job in the residency program in Rochester. Also, both of us came on green cards - we were offered them at the airport. That was how doctors came over in the 70s. Maybe because of the Vietnam War.... but they were offering doctors green cards on arrival. However, I had to be here before the end of 1975 as per the terms of his green card. I arrived with our baby and we started living in a small apartment provided by the hospital.

What are your memories of your first day?
I was in sari with a baby who was still in diapers and she was in my arm for 24 hours. She was devastated at leaving my parents with whom I was living, while my husband was in the US. But as soon as we landed and she saw her daddy in New York, she was excited and ran to him. And then from New York, we came to Rochester in a small plane. And this was in December and at the Rochester airport they didn't have any airbridges. You had to walk to the building from the plane. And with my high heels and sari, I slipped on the snowy ground and fell! I wasn't hurt and neither was the baby, luckily, but that was my funny experience on my first day in USA. I was really excited though - I was young and ready to explore. We were living in a small apartment attached to the hospital and, even though it wasn't my home, I was happy. And we got to live as a real family for the first time - all together. Before, I was with my parents and he was away with work. But back to the first day: we came home, had dinner, and slept. Next day, my husband says "I have to go to work". So, he went off to work at seven o'clock and I am with my baby and I looked out through the window and there was the hospital parking lot full of snow...white snow, like 10 feet high. And there were cars covered with snow. Oh my god! I just looked - remember, I have never seen snow in my life. I'm from the south of India (known for being hot and humid), and even Delhi where there were colder temperatures but no snow. But this moment is really stuck in my memory. And another thing - there were no people to be seen. In contrast to Kochi, Kerala, where you see people everywhere.

What was the biggest difference between India and the US?
Mainly people - you don't see people here! In India, there's a lot of life, color, noise, aromas, but here there's no one outside. I missed my family a lot, and there's not much of a support structure here. You do everything by yourself. I wanted to preserve the Indian culture while raising my kids. That was tough; I kept thinking “How would I do this?”, I’m seeing non-Indians everywhere and barely any Indians.

How was the South Asian diaspora in Houston when you came here? Did you feel welcome?
If a family migrates to the US now, they will feel right at home. But it was not like that back then. We were living in an apartment complex with maybe 3-4 other Indians in Rochester. That was really the only social interaction we had there. We’d go out for dinner with them once a month or so. To get Indian groceries, we’d have to drive far to a Chinese grocery store. And it was hard for me to make Indian dishes – I lived off of some spices my mother packed for me. Still, I didn’t regret my decision to come here.
Houston was much better. It was a multiethnic city with a moderate number of Indians already living here. So, my life was much more comfortable with more social contacts and cultural activities.

What was the best thing about being an immigrant to the US?
The best thing is, of course, the comforts and progress here. And, you know, I used to read about all the good facilities available in America, especially for education. This is the best place for higher education. In my heart of hearts, I originally wanted to study to be a doctor. Here, my son or daughter can be whoever they want to be. I was really excited about all the wonderful prospects for my kids.

What was the hardest thing about being an immigrant to the US?
My social life (or lack thereof) was the biggest minus point. I really wanted to go back to college, but couldn't, because my daughter and son were my first priority.

How did you adapt to living in the US?
A close friend of ours guided me through the day-to-day life in this country. She was my mentor and taught me basic things like doing laundry, do grocery shopping etc. Everything was new to me - milk in a carton, juice in boxes! But still, I was very excited about seeing all these things; the abundance of foods and vegetables was really exciting. Also, most women drive here and also work independently.

If you could go back and redo any part of the journey, what would you do?
I would have found some time to go back to college either here or in Rochester.

What advice would you give someone arriving in the United States today as a new immigrant?
Things are easier now. If you are an immigrant, make the most of it. This is a country of opportunities. Don't lose your identity. Keep up your culture - take the best of both worlds.

What is your definition of being American?
We are unique people - we have unlimited opportunities. I came in my 20s and I have preserved my cultural identity. I know who I am; I was brought up in India but raised a family here. And I am a confident woman.

I’ve heard that you are a founding member of Daya. Tell me more.
Oh yeah, that is my third baby - after my son went off to college in 1996. As I mentioned earlier, I became actively involved with Daya. We'd do things like providing rides for seniors, give homeless people fresh food, or cook for them. Around that time, a tragic incident occurred in Sugar Land. An Indian lady shot her husband and two children and set the house on fire and killed herself. And that was a very big shock to all of us. They were well educated and well to do. Indians were seen as hardworking with happy family life. So, people were very surprised. Obviously, it was a horrible domestic violence situation. She had no family here and also no support. So, we discussed how to help and avoid a terrible incident like this happening again. We started a helpline and printed brochures in different South Asian languages explaining how to get support. Our community did not accept that something called domestic violence existed in South Asian families. Their assumption was that we don't have any such issues. In the beginning, our ideas were not welcome in the community. But gradually, people became more accepting. The rest is history. We got the seed money of $5000.00 from Indo American Charity Foundation. Now we are an organization with a million-dollar budget. We will soon be celebrating 25 years of service to survivors of domestic violence.

What does Daya mean?
Daya means Compassion in Sanskrit. It's not an acronym. Our mission is to give empathy, compassion and support.