"I had the best time of my life, frankly speaking. I went around to museums, I went on dates, I went alone around places and checked things out and I was doing this in the middle of the night, the middle of day, it didn’t matter." 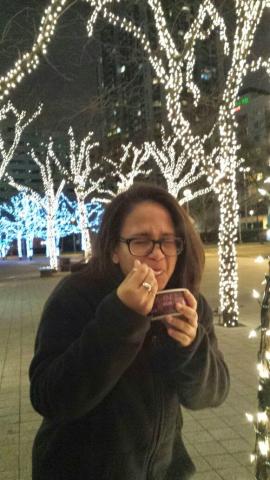 
I think I got off at Liberty International airport and I was really nervous because I had to go through immigration and obviously I had a preconceived notion about how American immigration is. So I thought, you know, there was going to be a burly man who was going to stare down at me and make me feel really scared. But it wasn’t because I was a student and I had a valid Visa and he asked me a bunch of questions and then I proceeded to take my luggage and that’s when I had my first surprise.

So usually in the airports in India, you know the trolleys that you can use to put your luggage on and then roll them out into the street before you get into the car? Those are freely available in India and I was like, “Oh yeah, I’ll get a trolley!” because I had these huge luggages with me. But, uh, lo and beyond, I needed to may money. So I was like, “What? How can I be made to pay for something that I was going to use for five seconds?” But I just had to get over it and pay for it and got out. I had my brother-in-law pick me up at the airport and we drove to my sister and his place in New York, actually, and I stayed for the first---I think four or three days in New York, in Upper East Side Manhattan. So it was fabulous for me actually.

I stayed for four days in New York and then I moved to Jersey City for the next two weeks where I was putting up with a schoolmate of mine. And commuting to Rutgers and then I finally found a place for myself close to my department.

I think one of the most important things that I—my experiences that I had when I was here was just my roommates. Because, when I first found a house, everybody back home told me, you know, you’re going to a new place for the first time. You know, everything is unfamiliar to you so the least you can do for yourself is to move in with a bunch of Indian people. So I was like, “Okay, I mean, sounds like a reasonable plan.” And then I did move in with a bunch of Indian people; however, I am strictly non-vegetarian and I moved in with three girls who were strictly vegetarian. And they had very strict rules about not to eat meat or not to cook meat at home and um, I’m not someone who’s prone to catch compromises because I don’t believe I don’t need to compromise on my living style given that I’m paying rent. So I got into a heated argument and within 48 hours I moved out and I moved in with four Americans actually. And since then, I’ve lived in the same house. I’ve actually gone through about like nine roommates, all of them are Americans, and I’m friends with all of them. I mean, it’s been amazing actually. And, uh, it turns out that I’m the only girl in the house and I live with four boys. Four American boys. And you know what? Actually, I prefer it this way. It allows me to say what I want to say and, you know, if I find something that’s bothering me, all I need to do is send out a passive aggressive text and it’s taken care of. (laughs) So I like it that way.

I think that the social construct here is very individualistic. Social interactions are very restrained in many aspects. If I were to give you an example…if I were in India and I had already spent about 18 months in university, by now I would have had the dynamics with at least two or three people with who I would have been comfortable crashing at their places at night if I were to say, go out drinking with drinking with them. And you know, it would have been a normal progression from going out drinking and then going to one of their places and staying over after dark. I feel the sense of personal space in this country is a very strict one and there’s nothing wrong or right about it. It’s just different from where I come. So yeah, those are maybe things I’ve had a little bit of trouble gaging sometimes. I was aware of it because I am exposed to American culture through media enough to understand it. But when I’m experiencing it firsthand, it’s a little different maybe.

The best two weeks of my life over the past 18 months that I’ve been here in America have been the two weeks I spent during winter in New York when I was housesitting and dog-sitting for my cousin and my brother-in-law who actually picked me up. And I was there alone. And I had the best time of my life, frankly speaking. I went around to museums, I went on dates, I went alone around places and checked things out and I was doing this in the middle of the night, the middle of day, it didn’t matter. I lived for a year before coming year in a city called Bombay in India, which reminds of New York a lot. I love Bombay and I when I saw New York I was like, “Oh! This is so similar.” And it is the one city that I’ve been to, among the ten cities I’ve been to in this country, where I can go out wearing my ethnic clothes from India and like completely be at ease and not even have a single person to look around and be like, “Oh, are you dressed up for an event?” In New York, I don’t expect anybody to ask me that. Maybe that’s because of their general apathy, but even then, I think that it’s because there’s so many people there, they don’t really care at all.

It’s a brand new thing and they’re good and bad, and not to be disappointed in people just because they didn’t live up to your perceived expectations from your past experiences because that’s unfair on them.