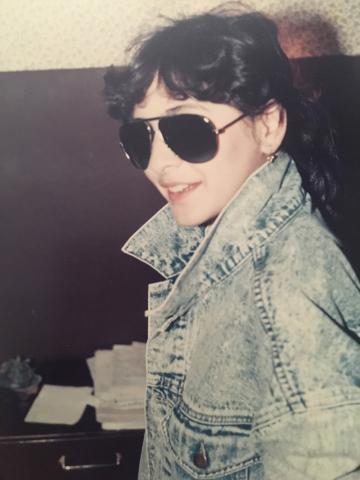 
Hello, my name is Ayla. I am 10 years old and I am the daughter of an immigrant. I was born in Houston and my dad was born in Ohio, but my mom was born in Iran. She immigrated to the U.S. in 1990 when she was 15 years old. This is a story of her first few days.

Ayla: So, when did you start school after arriving to Plano, Texas?

Shalizeh: So, we arrived at midnight. It was February 22nd, 1990. And, that morning my aunt took my brother and I to school and enrolled us. So, the next day, the 23rd, is when it was our official first day of school.

Ayla: How was school? How did you feel?

Ayla: You told me something funny happened that day. What was it?

Shalizeh: It was my lunch. So that morning my aunt gave my brother and I a brown bag and said that, "This is your lunch. Here in America students take lunch with them to school… and this is what they eat for lunch… and now you're in America and you're going to eat what Americans eat." So, that was pretty exciting. Lunch comes around and I was already trained, found the cafeteria and I sat down and I was looking forward to eating my sandwich. And as I opened my brown bag I see a white bread sandwich in there which looked pretty good. So I take a huge bite and the piece of bread with whatever was inside of it just sort of stuck to the roof of my mouth. And I could not place the taste. I didn't know what to do. And I struggled through the whole lunch trying to actually swallow this sandwich.

Ayla: What was in the sandwich?

Shalizeh: It was peanut butter!

Shalizeh: But I'd never had peanut butter before! That was a new thing. That's what Americans ate for lunch, evidently, and I had never had it.

Ayla: Did you like the taste of the peanut butter?

Shalizeh: You know, it was such a struggle to eat that sandwich and that day was so traumatic that I really didn't like it. So I stopped eating peanut butter.

Ayla: So, you like peanut butter now. What happened?

Shalizeh: I met your daddy. Fourteen years later he reintroduced me to peanut butter. And now, of course, I love it.

Ayla: Thank you for sharing that story with me.

Ayla: So, do you want to go make a peanut butter sandwich with me?

Musical interludes in the interview are sections of Concerto No. 2 in G Major Op. 13, 3rd Mvt. by Seitz, played by Ayla Patel on violin.