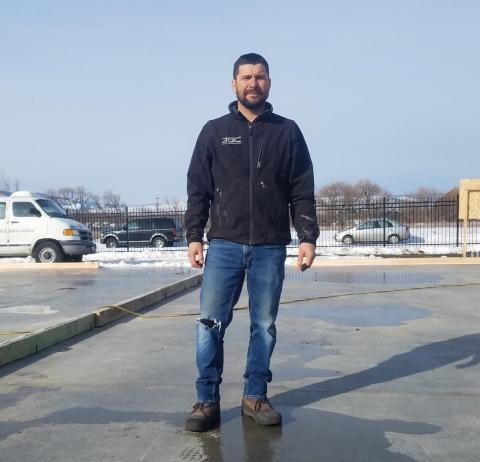 
My father, Oscar Rodriguez, was born and raised in Colima, Mexico. Leftover construction material and any other kind of abandoned scraps built his childhood home. Growing up poor, Oscar began working to help support his parents at an early age. Eventually, at the cusp of adulthood, he followed in his community’s footsteps and immigrated to the United States.

He did not plan on permanently residing in the United States. Like those in his hometown — people who had traveled “up north,” saved some money, and eventually returned to build a home — Oscar set out to simply earn a wage. He summed up his preconceived view of the United States with a saying he had heard as a child. “You sweep up the money from the floor,” he recalled.

Just like this image of the United States, plans changed. He met my mother a year or so after getting settled in Modesto, California. And he now lives in Wenatchee, Washington with my mother and two siblings.


My name is Oscar Rodriguez. I was born in the city of Colima, Mexico. Before I turned eighteen, a cousin and I, Octavio, decided to take that precipice and go to the United States. We got to the border and solicited the services of someone who knew the path. That was Friday in the evening. It took us all of Saturday, walk by night, sleep in the sierra. Normally we walk during the night because it’s less visible and every time the guide would see a car or the light of a car that would get near us. He would say, “get on the ground,” and whatever way you did, you weren’t careful about it, you were simply hiding.

And on Sunday in the early morning, we had an encounter with immigration. We had boarded the car, in this case it was a minivan. There was about a dozen of us. We thought we had successfully passed. An immigration patrol car saw the van, and well they know what cars can carry people. And it turned around. The guide who was taking us, noticed this, and parked the van in a field of oranges. We got out how we could. They narrowly got me. I remember seeing how an immigration officer grabbed one of the ones that was coming with us, but I was able to hop a nearby fence.

After arriving in Los Angeles, where I met with my uncle Rodolfo, on Sunday, we set off for Waterford, California. Counting the days, it was six days without a shower, without shaving. The first experience was of wanting a shower, but you feel like you accomplished … something.