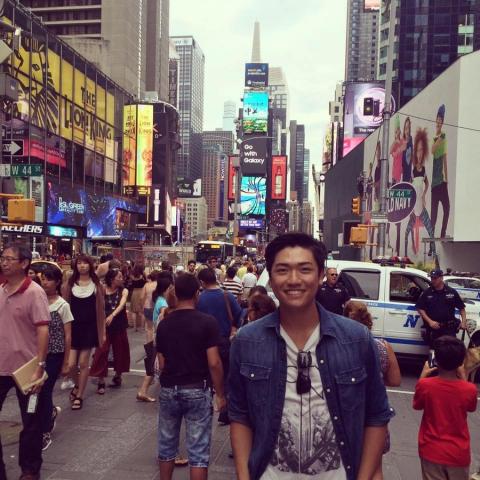 
Hi, my name is Shaun Sik. I’m from Malaysia. I first came here to U-Dub in Washington when I was at the age of 19. It was pretty hard transitioning at first because it was different cultures and people here use different slangs to communicate and to socialize.

But, I used to think that I had relatively good English compared to my fellow countrymen, but like coming here *laughs* slight differences in like phrases and pronunciation. The first thing I noticed upon touching down was...so I landed in LAX and there was a line going into a restaurant or something and I didn’t realize people were so courteous to one another. So, like, just opening doors in general, like opening the glass doors *laughs* I almost hit somebody in the face with the glass door by not leaving it open and they were just like running into it. *laughs* I was like I could learn that things aren’t same here as in back home.

But I really love it. The people here are very friendly. They really take the time to like try to fight on as much as they can within the shortest span of time they can. So back in Malaysia, like when we ate at restaurants we would never bus the tables or like we would never really have conversations with waiters or waitresses because they were just expected to do their job.

And so when I first came to Los Angeles, I remember I was in this Italian restaurant and this waiter came up and started to talking to my family because he overheard a conversation about my sister wanting to be an actress. And it turns out that this guy, he himself was actually an actor and he acted in like multiple Hollywood such as 2 Fast 2 Furious and...I can’t remember one more, but it was like pretty famous films. Then, they went on to have a 45 minute conversation about breaking into Hollywood and making connections.

And it was really enlightening because to have somebody working like a waitressing job but actually having like relevance was not something that I would expect, especially in my country where you would not expect somebody who was actually doing cool stuff to be doing a job like that, just part-time. But in America, like, it doesn’t matter what job you have because like everybody’s individual and they could be doing something not really for like financial or monetary gain, but like for some other reason that you would not know until you actually started talking to them.