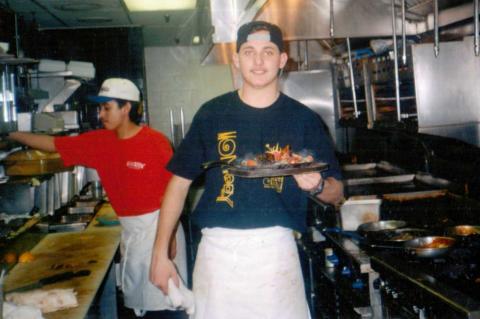 It was 1997- and I crossed the border running. I was 17 years old. I was trying not to get shot. I saw dead people all around me, they were the others who were trying to cross. All I could think about was surviving. I didn’t know the culture at all. I had plans to go to Detroit, where I heard there were some jobs. People in the United States are going fast to nowhere. Life in the States is so stressful. People are in a hurry to go nowhere. I didn’t understand a single word people said. And you can’t do anything without knowing the language. All I could do was hide. I was nobody. It was the roughest time in my life. I remember it was cold. All I could do was walk: I had no addresses or numbers. The first three days were the worst. I slept under a bridge for those three days. I didn’t use a blanket, instead I had some foam and cardboard to keep me warm. I didn’t even have a change of clothes. I was thinking about going back- but it was too far back. If I went back, I knew I would die. I left my family because the countries in South America are controlled by drugs. I had two options in Mexico. Either I could join the military or join the cartel. The military was controlled by the drug cartel. You could only survive for 10 years, and your family wouldn’t be able to find your body. If I could find work in America I would send money back home. After walking, I found a restaurant. I went in and asked for a job. I was a dishwasher. Somehow, I was on break and I found my cousin at the restaurant. I hadn’t seen him in years. He took me to his house and offered me a job at a restaurant where he was a cook. I became a cook at this new restaurant. Here, I met and fell in love with a waitress. We got married in Vegas when I was 18 and I became a legal citizen. Life has gotten easier as the years have passed. I am a property supervisor now.