"I noticed that people smiled at strangers a lot. I thought it was so weird. I didn't know them and they didn't know me but they smiled at me anyway." 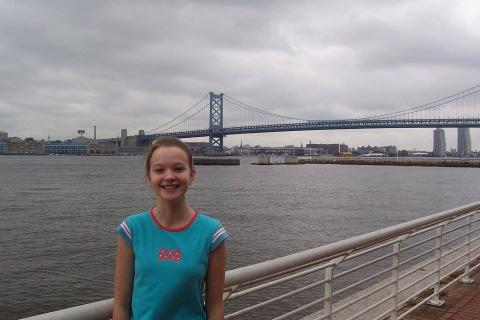 Tatiana did not want to come to America.

“I was upset at first because I didn't want to leave my friends and family. It was especially upsetting because there are so many mean stereotypes about Americans in Russia. Like that they're lazy, or stupid. My classmates actually told me they hoped the plane that would take me to America would crash because I was basically betraying my country. I don't blame them. I just think grownups used very harsh language about Americans around kids… that’s why they were so cruel.”

“I think I just really wanted to take the yellow buses to school that I'd see in movies.”

Upon arrival, Tatiana could not believe how freely people smiled at each other.

“I noticed that people smiled at strangers a lot. I thought it was so weird. I didn't know them and they didn't know me but they smiled at me anyway.”

Tatiana remarked upon other differences between Americans and Russians.

“I thought [Americans] were a lot friendlier than Russia[ns]. It took some getting used to. There were also a lot of people from different cultures from all over the world, and I never saw that as a kid.”

“I couldn't say much in English when I first moved, and it made me feel inferior having everyone speak a foreign language around me. I remember seeing toddlers and being jealous that they spoke better English than me. I used to think it was embarrassing to have an accent or say things wrong, so it made me really quiet and shy.”

Tatiana remembers her first visit to the supermarket and reflects on how it still affects her today.

“There was a young girl that worked there who walked past…and smiled at me. I know I said…that I found it strange that people here smile for no reason, but that made so incredibly happy and that's when I knew I was going to like it here. It made a difference, I think, having a stranger do something so trivial but kind for absolutely no reason, because I look back at that moment as the day I knew I was home. And it just opened my eyes, knowing how much of an impact a smile can make....”

Tatiana found it scary to leave everything behind and reminds readers that immigrants face incredible diversity in their experiences.

“I think people have very different experiences - for instance, not everyone gets a fairytale ending after their big move. That's why I get upset when people say, ‘If you don't like it here (in the US), get out.’ Not everyone is going to like it here, or…somewhere else that they move--so it's important to not be insensitive and say things like that. It's a huge change and every experience varies, so we can't just assume people have a better life here. There are many reasons they might wish to go back home but cannot.”