First Days Project
My name is Rashna Batliwala Singh.
"The sun was beginning to set, and the deepening shadows outside compounded my unease. I did not know where to go or what to do." 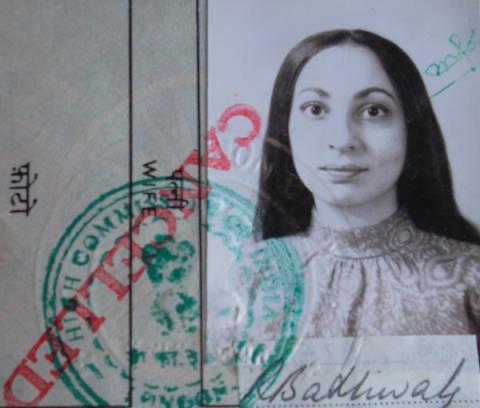 I left India for the first time in the days when you needed Reserve Bank permission, and foreign exchange was hard to come by. En route to Boston, I stopped in London for one week to stay with my uncle and aunt who had immigrated to the U.K. many years earlier. Since I was starting a graduate programme in the Fall semester, they helped me to shop for a warm coat, as well as a cap, gloves and boots to brave the long New England winter.

I left India full of bravado, confident that I could find my own way to Mount Holyoke College in the western part of Massachusetts from Boston’s Logan Airport. In London, my uncle and aunt met me at the airport and saw me off, but when I landed in the United States, I was truly on my own. My first sight of the American continent was of an azure ocean, flecked with whitecaps, edged by a rocky coastline. Sailboats bobbed merrily in the vivid sunshine. The scene seemed to reflect my excitement and anticipation. But as the plane descended, my spirits sank along with it.

When we landed, I felt lost and alone, even among the crowds at the airport. The sun was beginning to set, and the deepening shadows outside compounded my unease. I did not know where to go or what to do. My bravado had completely disappeared. Then, suddenly, I saw a middle-aged woman with a nametag that said “International Student Advisor.” She was there for a Boston area college, but I walked up to her and asked how I could get to Mount Holyoke College. She looked at me kindly and told me to wait until she had rounded up the students she had come to greet and connected them with their host families.

By that time it was getting close to dusk, so she advised me to spend the night in the city and took me in her car to an International Student Hostel in Cambridge. As she dropped me off she wished me well and gave me clear and detailed instructions to take a taxi the next morning to the Peter Pan bus depot and catch a bus for Springfield, then change to another bus for South Hadley.

I still recall driving through the airport tunnel in her car, feeling like we were on the wrong side of the road, yet safe and secure in her care. She is probably long gone now, and I don’t remember her name, but all these years later I would like to say a simple “Thank you” to her for her kindness to a young woman who was feeling very forlorn in a foreign land.