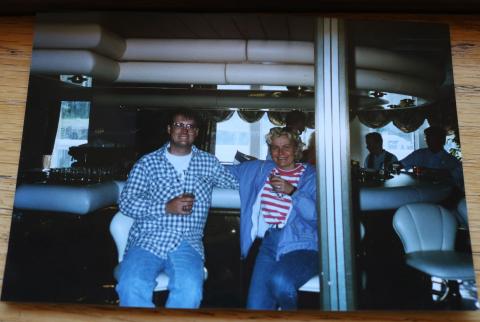 
Tuija Thatcher (maiden name Rantanen) immigrated to Seattle from Tuusula, Finland in 1994. Thatcher met her now husband on a cruise ship and decided to move to America to be with him. She didn’t know anyone in America besides her husband and didn’t speak much English. Despite this, she came to the States with only excitement and anticipation for her new life.

Although Thatcher has lived in Seattle for over 20 years, she still incorporates aspects of her Finnish heritage into her life. She has taught both of her children some Finnish and has many Finnish decorations in her home. One of her favorites is a tapestry that is over 100 years old she remembers playing with a child. Now, Thatcher is a stay at home mom for her two children and is still enjoying her life in America, despite facing loneliness and language barriers when she first arrived in the States.


My name is Tuija Susanna Thatcher, maiden name Rantanen, and the country I’m from is Finland.

Only thing that brought me to the United States, is that I fell in love to an American man from Seattle, Washington.

I landed first time the JFK airport and it was seeing the coastal line from Atlantic Ocean, and then, like starting like descending, then I thought “oh my God! Everybody in this country has a swimming pool!”

Seattle port you know, big kind of containers, I was like “what is this” then, seeing the ocean, of course couldn’t see the mountains or anything, but the ocean. That ocean is still kind of a big awe to me.

After few months I got the shipment, some of my furniture from Finland, some little things, and you just see outside, those birch, little logs there. My dad piled those big bunch to the containers because he knows how I love fire, fireplace, and birch is my, it’s sort of like really common tree in Finland. You barely see at all those here. Dad knew how much I loved those. He sent bunch of birch logs for me. Okay that’s over 20 years ago, I still have them. I want to keep them around just sitting. Fireplace is full of them but I don’t want to burn them because they’re so beautiful.