"It was the first time I’ve seen a limo, first of all, so I didn’t where to ride. So I sat right next to the driver." 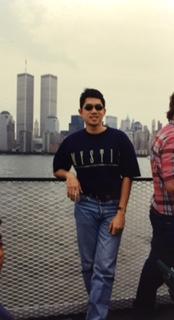 
I landed in Newark Airport. Didn’t know…all I had was to go to a hotel. The Howard Johnson. You can still see the Howard Johnson, right? So they gave me instructions. When you get to the airport, there’s a shuttle that takes you to the hotel. So I took that. Everything was like typewritten. So took that, got to the hotel, and yeah, that was it. But there was nothing! You know, the hotel is like isolated. It’s by the tollgate. Even if you go out of the hotel, there’s nothing. I sat all day in my room *laughs *. And the window was facing the tollgate, so I’m just like counting cars going in and out of the toll. * laughs * So that was it. And then, you know, I think that was a weekend and then they told me to go to the office, which was in the city, on Monday. I didn’t know how to get to New York City.

First day in New York City, all I had---I have a map so they told me where it is. Everything’s numbered so it’s easy to figure out where to go. So I was able to finally find the office. Sign papers and all that. And they told me, “Hey, go get your social security.” Well, where is it? Oh, it was by Times Square. So I went there, got my social security. You know, first time in Times Square. Man, I said, “This place…I’ve only seen this in movies.” So I stood there, right in the middle. I saw McDonald’s. That McDonald’s, right there? You know, I went in, I think that’s where I had lunch. Once I got out, I stood there for maybe ten, twenty minutes, just looking around.

So I stayed at the hotel for a couple of weeks. That was my home for my first two weeks. Two weeks later—So, our company has a staff house so they rented a house in Jersey City. So if you don’t have house, they let you stay in that house. I like it because it’s right by Jersey City. It’s close to the mall. At that time, you know, we didn’t really have work because we were under contract. They pay us. So they pay us, just sitting around the house watching TV. But they were trying to find work for us. That was the deal at that time.

Well, the funny thing is when I left the hotel, they sent a car to pick me up. It was a limo. It was a stretch limo, right? It was the first time I’ve seen a limo, first of all, so I didn’t where to ride. So I sat right next to the driver. *laughs * There was a big space in the back! So I had this big bag….alright, so put in the trunk of the car. What is this? Where do I ride? I mean, this is a big space. So I sat right next to the driver. That was it.
So I stayed in Jersey City. Now that place, that area is pretty nice. It wasn’t that nice before. And, you know, stayed there for a couple more weeks, didn’t really have work then so all we do is—the mall is very close so there’s a movie theater. So we watched every movie they showed there! *laughs* And we would just watch TV all day.

And then, they finally found me work which was in Parsippany and the deal was when you get a job, a real work, you’re supposed to get out of the house. I was already working for…maybe a couple of weeks, but I was still staying there so they had to kick me out. So I was like, “Oh, alright…” I knew somebody who lived, you know, also in Jersey City who had an apartment. So I said, “Hey, if I can stay with you for maybe a few weeks and then I’ll try to find my own apartment.” So I stayed with a friend for maybe a month and then finally found an apartment in Union. Once I got that apartment, that was it. I finally settled in in America.
It was a mother-daughter house, so I rented the second floor. A friend of mine helped me move in, but I really only had one bag. The owner said, “Oh, did you have stuff?” Yeah, right here! I had my own apartment, but I only had a bag. That apartment was empty. You walk in and there was nothing. And I bought…you know that crate you put above, you know, just over your mattress? That was my first bed. So I just laid it out on the floor. That was my bed and that was my bed for months. I never bought a bed! And I was settled in.

The first year? It was a lot of adjustment. The snow that first year…all the snow. Even though I’m just a renter, but the owner, she’s an older woman. She lives alone. She’s a very nice person. But I was so excited about snow, I’ve been shoveling every time it snows. I’m the one shoveling, I was there! I would go out after snow, first guy out just start shoveling * laughs *. It was fun the first year, next year I was like, “Eh, you know what? Maybe I’ll just shovel this far.”

And, I guess, the biggest adjustment is being away from your family. Calling the Philippines at that time was very expensive. I think it was like thirty-five…or sixty cents per minute. I called every time. You know, you don’t have anybody here. So, sometimes what I would do, I would list down what I wanted to tell them so I don’t miss anything. Stories about, “Hey, the other day, I was there, I saw this, I saw people…” and all that stuff. I list it down so that there’s no, you know, lull in the conversation. It’s always go, go go. Sixty cents per minute, it’s very expensive! *laughs* So, a card of ten dollars, you know, it goes by very quickly. I think that was really the biggest adjustment. You know, being away. You feel very far. But after that, it was fun.