"In those days, immigrants really stuck together." 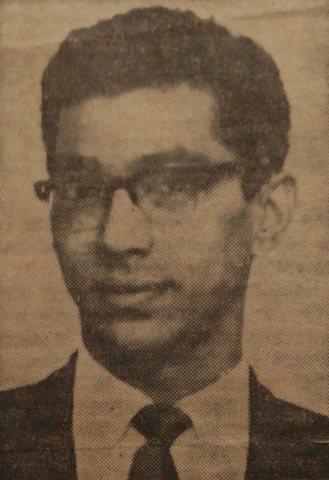 
My name is Sameer Shah and I would like to tell my dad’s story. His name is Dinesh Galabada Shah. So my dad studied law and he did pretty well with that. He, then around that time, decided to move to the States because there were not any jobs for lawyers at that time. His oldest brother had moved to the United States. I think he came over in 1958 and he did come over on a boat. He was studying at University of Urbana-Champaign and so he helped my dad come over. And I think, I’m almost positive my dad was the second Shah to come to the US. He came in February 1963 and he landed in Chicago because he had gotten an admission to the University of Northern Illinois at Dekalb and he was going to study there. He came over and he was studying there. One interesting thing about when he came to Chicago, my dad has always been a relatively small person. He was, I think, 5’4 just about and weighed 97 pounds when he came to America. He didn’t have an overcoat, but came to Chicago in February. All he had was-- he wore a suit, so he had a suit coat but he didn’t have an overcoat. That was who he was when he landed.

And he was working in the bargain basement at Sears, I believe in the city while during the week he was in Dekalb studying there. He did pretty well in school. By this time, all of his skipping class days were gone and he was pretty focused on learning and doing a good job. He won a scholarship at some point from Rotary or Kiwanis or someone gave a scholarship and he won that. And there was a little write-up about him with his picture in the paper in 1964 as a result of winning that.

And a couple of anecdotes from that time. He wrote a paper for some class and he said he was the only student that hand-wrote it. Everyone else type-wrote theirs and I guess he didn’t think that was something he should do or the thought hadn’t occurred to him. But apparently, when the professors gave the papers back, he told my dad, “Dinesh, your paper was the only one that was handwritten and coincidentally, it was also the only one that was a pleasure to read.” So he was very proud of that comment and told me that many times growing up. So he definitely was...sounds like he was doing well in school and well-liked by his professors.

He was studying, I should say, to get an MBA, focus in marketing. Which is coincidental because both of his kids, Uma my older sister and I, have landed in the marketing field.

One other little incident that comes to mind that I want to share. You know, my dad didn’t talk a whole lot about racism or feeling outside of the culture. In fact, once he started working out of school he made some great friends, you know, American friends, that are good friends of his to this day. So my dad’s experience is not one of facing a lot of overwhelming racism or feeling like he didn’t belong. He very much felt a part of this country from day one, is the impression I got. He felt it pretty welcoming. But there were some incidents that he encountered from time to time and one of those incidents was when he was working at a country club with another friend of his, a South Indian person. And South Indian people I guess tend to have darker skin, or can have darker skin. I guess they hadn’t been working there very long and they had gotten the job together and at some point, one of the managers of the country club, you know, approached my father and he said, “Hey listen. You’re doing a good job and I just want you to know that I have no issue with you being out in the dining area where the members can see you, but your friend is too dark and he needs to make sure he stays in the kitchen and is not seen.” So my dad was obviously pretty disgusted by this comment and the way he always told me this story is he looked at the manager, whoever said this to him, and said, “That won’t be an issue because we both quit.” In those days, immigrants really stuck together.

He did end up making the railroad his career and wound up ultimately in a marketing role. So he moved in 1966 to St. Louis, started working. He wanted to get married, so he went to India for a couple weeks and through friends and connections, got introduced to my mom and her family. I want to say that they met on a Sunday and married on a Friday or Saturday. I think that’s true, that may not be exactly right. My mom ended up coming over a few months later. At the time, she was twenty-nine, had never lived outside her parents and family, never been outside of Bombay. Her English skills were very limited and she basically got on a plane and flew across the world to go start a new life with a man that she really didn’t know.

She got here and they lived in a high-rise apartment building in St. Louis. She immediately, you know, assumed the duties of a stay-at-home wife. She’s always been a very good cook, so my dad was fortunate in that way that he got to enjoy good food that he was used to eating. So he and my mom didn’t have a whole lot in common, but one thing that they did enjoy was watching TV together. And my mom to this day will tell me that they watch shows like Gunsmoke, Bonanza, It Takes a Thief, Mannix. They used to watch those shows in the evening and they really bonded over that I guess. That was kind of their time to do something together.

In the past, you know, my mom first came to this country, she used to go to church to pray. She just didn’t have very many other options. Over time, that started to change.

Most of my parents’ close friends were other Indian families. Their primary social activity was having people over for dinner on Saturday night or going to somebody’s house for dinner.

That is pretty much my dad’s story. What makes it remarkable to me is that he came from India to a foreign culture and embraced it, made it his own, succeeded, raised a family, dealt with a lot of the challenges that you have to deal with when you immigrate to a new country. I’m really appreciative to him for being making sure that we were bilingual in our house. You know, it’s interesting because his story on the one hand may seem very traditional or similar to other immigrants, and it is in many ways, but to me it is pretty remarkable what he accomplished.