First Days Project
My name is Alejandro Murguía.
"My dad always encouraged us to not work like he did. He was a laborer. So he encouraged us to be educated. But obviously he didn’t know how to go about the process." 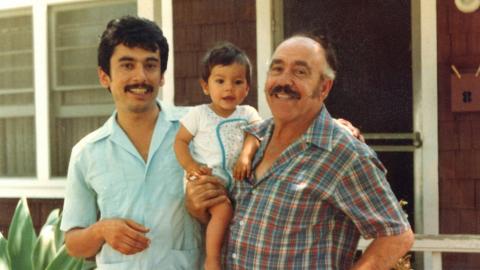 
“It was in October, must have been 1955,” says Alejandro Murguía, San Francisco’s poet laureate, remembering his early years back in California. He was born in the United States, but moved with his family to Mexico when he was a toddler — first Mexico City, then Tijuana.

At age 6, he returned to Southern California with his family for economic reasons. It was a rough age to restart life in another country but, eventually, Murguía would author the Southern Front and This War Called Love. Both won the American Book Award.

Murguía, born in 1949, talked to us as part of our First Days series, when immigrants and refugees share their early memories of growing up in the US. Here, we’ve focused on his early school days as part of Global Nation’s education coverage.

Back in California, Murguía remembers being “the only non-white person in the school” during his early grades. “Totally white kids, and so there was a period when I was very silent. It’s through reading that I break out and find my place in school,” he says.

By third grade, he was a voracious reader. “I remember my library card having like 30 books checked out that semester,” he says.

“By the time I’m 15, I start scribbling in notebooks every night. Here’s what would happen. I’d go to the liquor store and buy a big bottle of RC Cola, not realizing the caffeine was going to keep me up all night. So I’m writing in this journal until I finally fall asleep at one o’clock, something like that. But then the next morning, I can’t get up to go to school, right? So it became this endless cycle. High school was a complete disaster for me.”

García also encouraged Murguía to take his SATs. “I scored really high,” he says. “And so she showed up one day during that summer and takes me to Los Angeles City College and enrolls me. If she had not done that, I had no idea of going to college. My dad always encouraged us to not work like he did. He was a laborer. So he encouraged us to be educated. But obviously he didn’t know how to go about the process. He insisted that we finish high school, which we did, but after that, he had no idea how to enroll somebody in college. He’d never been on a college campus. So it was kind of fortuitous that Grace García sent me to college.”

But Murguía credits his art teacher, Grace García, with noticing his passion. “I started showing her some of my work, and she gives me a lot of books to read, a lot of heavy stuff. I’m reading Sartre, ‘No Exit,’ for example, and ‘Nausea’ and ‘Candide’ by Voltaire. And she’s sending us to museums to look at Picasso, Van Gogh and Dalí. And we’re all in love with Dalí because he’s so far out and crazy and stuff. And that’s probably where I first started reading poetry.”