"The main obstacle to assimilation is people’s attitudes. If they are hostile towards you, then you feel like an outsider. I was shielded because my new husband’s friends, the people I met volunteering at the hospital, and strangers everywhere were nice to me. Thanks to this, I was able to make myself part of the American scene." 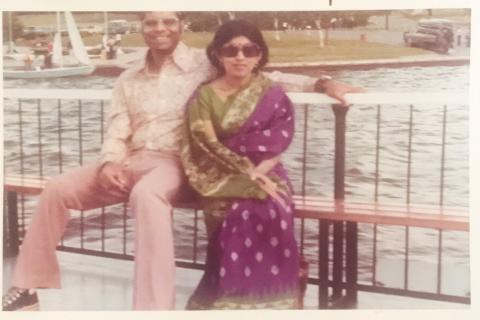 Anuradha, known as Anu, was a 22 year-old living in her parents’ home in Bangalore when she was introduced to a young civil engineer named Mohan, visiting from the United States. He had immigrated for graduate studies to the US a few years prior. Mohan and his sister came to Anu’s parents house where they were served snacks while the families socialized. Later, Anu and Mohan went on a brief outing for coffee and agreed to get married. They were engaged and he returned again in November, 1972 for the wedding. Anu got her green card right away and made plans to move the US by December.

“We came together,” she remembers. “Before leaving, I got some overcoats and woolen pants and then in Delhi, Mohan bought me a leather jacket. I felt very prepared.” After the long flight, they arrived in Chicago in the middle of a blizzard. “Unfortunately, what I did not think of was shoes. I only had sandals and open-toed platform heels. My feet were so cold! I wore socks with my heels for a long time because my shoe size (a US size 4) was so small, I could not find shoes anywhere.”

Mohan had a roommate named Subodh at the time. He was scheduled to move out but for the first 15 days of their married life, the couple shared the apartment with the roommate there as well. “The good news was, Subodh knew how to cook! He did the cooking and Mohan did the dishes! At first Subodh thought I would cook for them but when he saw I had no idea how to prepare a meal, he taught me how to make dahl, how to grocery shop, and how to use the stove – which was very helpful.”

“Our apartment was in the Lakeshore area and it was safe and interesting - you could walk to Lincoln Park.” The Indian population in the area was very small and it was rare to see much diversity. Anu quickly assimilated with the American friends that Mohan had made. “Our one friend Judy had a large house and would rent rooms out. Some of the renters were Northwestern University students and they became our friends too. They were very educated and interested in international things. They were curious about our arranged marriage, our Indian culture and the food.”

Soon, Mohan’s former roommate Subodh also married as did another Indian friend named Fabian. Their wives came one month later, providing company for Anu. “I was the leader of the gang. I taught them how to cook. We had similar experiences with our sexist husbands and we would laugh at them.”

Despite the fun of being in a new country with good friends, Anu pined for her family in India. “I was homesick from time to time. I would call my mother and cry. I didn’t know anybody and I was the first person in my whole family who came here.” One day, she had a transformative moment while walking in downtown Chicago. “I saw an old lady struggling to carry many bags, so I stopped and offered to help her to her apartment. After I came home, I felt sad – because I realized I was like that lady. She was alone and so I was too. I thought, ‘I don’t have anyone here.’ In that moment, it came to me that I need to be strong and make my own networks. I realized I can’t just rely on my new husband, I have to be independent.”

Anu had a social work degree from India but it was not recognized in the United States. “I felt strongly that I would one day make something out of my life. Although I could legally work, I could not find a job in my field, so I volunteered helping babies at Fulbright Hospital. These were abused and abandoned infants and toddlers. They needed someone to play with the children and love them and that’s what I did.”

Eventually, Anu went on to receive her masters degree in social work from The University of Pennsylvania and a doctoral degree. After living in Philadelphia for thirty years, then New Jersey, Atlanta and Houston (where she and Mohan moved to be closer to their daughter and her family), Anu’s professional career included roles as Ombudsman at Princeton University, Coca Cola and MD Anderson Cancer Center. She also founded numerous non-profits to support new immigrants from India, including SEWAA – Service and Education for Women Against Abuse, an organization designed to assist South Asian American women facing domestic abuse.

When asked how she thinks her immigrant experience compares to more recent arrivals, Anu says, “I felt more welcome than people do now. The country was more open then. Midwesterners are warm-hearted and generous. There were very few immigrants and in the 1970s, the country was coming out of the Hippie years and people were interested in India. It also helped that I spoke fluent English.” Her assertion doesn’t change even when it is pointed out that immigrants today usually have other family already settled here, technology makes it easier to communicate with loved ones back home and familiar foods and other aspects of culture are readily accessible. “The main obstacle to assimilation is people’s attitudes, she maintains. “If they are hostile towards you, then you feel like an outsider. I was shielded because my new husband’s friends, the people I met volunteering at the hospital, and strangers everywhere, were nice to me. Thanks to this, I was able to make myself part of the American scene.”