"My chest was pounding, just thinking that I did something illegal and then they were arresting me." 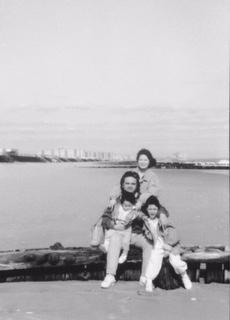 
My name is Alex Peneranda. I was 37-years-old when I came to the United States in 1992. Well, my first day basically started when I arrived in the airport. It was a very difficult time for me because I had my son David who was less than a year old when we came. I was carrying him on a baby carrier in front of my chest and I was pulling my other child Nicole who was only like six-years-old at that time. So I had a baby bag. I had a six-year-old in tow and a baby in a baby carrier in front of my chest. And on top of that, I was holding a big envelope of chest X-rays, which was a requirement when we came here in the US as an immigrant.

So, when I arrived, people were separated into categories: immigrants in one line and US citizens in the other line. And the line for visitors, tourists, and immigrants was very long and I was towing a bag, a child, and carrying another infant with me. So I had a very difficult time walking through customs. And when I walked through the customs, one of these customs officers pulled me aside and asked me to follow him to a small room. And that was basically the start of what I thought was a nightmare on my first day in America. Because when I entered that room, all I saw was many people inside the room with their feet shackled to that metal bench. There were approximately twenty people there from different background and from different countries perhaps. I didn’t know what they were there for, but every one of them had their feet anchored to the steel bench they were sitting on. So that scared me because I thought I was doing something illegal. I came here legally having been petitioned by wife who was a nurse working here for the past six years before us. My chest was pounding, just thinking that I did something illegal and then they were arresting me.

They actually didn’t give me any explanation, but the customs officer pointed me to the desk officer who was processing paperwork for those other people there in chains. So he put me ahead of everyone else to process me. That’s when I realized that probably he was doing me a favor, pulling me away from the long lines out the regular processing desks and giving me preferential treatment to have me processed through immigration quickly because I had two children. That went quick. It wasn’t probably less than ten minutes that I was done with my papers, but he never explained to me that he was trying to help me. He just pulled me aside and brought me to that room, so that was scary. And there were no cell phones at that time, so I had no communicating with my wife who outside waiting for us. So that was basically my first impressions of my life in America.

So my first year was basically just staying home because with the two children it would be impossible for me to work. Nobody would be left with the children, my wife working nights as a nurse. But somehow, because she was not working from 7pm to 7am, it afforded me to work part-time. I did some weekend work as a photographer, having extensive experience in photography before coming over. I supplemented our family income by doing photography on the side and about three times a week working part-time as a dishwasher in one of the nursing homes in the neighborhood and most of the time, just taking care of the children growing up.

Basically, we lived in a one-bedroom apartment, but we were close to a beach so most of the time we were on the boardwalk in the Rockaways. Nicole was six, was starting first grade here, but she was way ahead of her classmates because she was already partly in the first grade in the Philippines. Both my mom and my aunt having been retired teachers were teaching her before even coming here. At six-years-old, she could already read and write and was fluent in three Philippine dialects. She really didn’t have a hard time adjusting to the school system here.

But my wife then didn’t know how to drive yet, so the hard part was during the wintertime when I had to drive my wife to work at midnight. She was working from 11 pm to 7 am. They call it night shift here. So at 10:30 in the evening, I had to wrap the baby and Nicole and have them were jackets and I had bring them to the car to drive my wife to work. Then I would go back to the apartment, sleep. And then at 6:30 in the morning, I would have to wake them up again, wrap them up, to fetch my wife again. Two to three months…before my wife finally got her driver’s license and that ended the ordeal of driving her to work and picking her up in the morning. That was basically routine of life---first year here in America.

I guess you have to make sacrifices because most of my friends have their parents come over to take care of their children, but we didn’t do that. We had to take care of them ourselves. That’s probably one of the hardest parts. Juggling taking care of your family and trying to find livelihood as a---to make ends meet here in America. For Filipinos, it’s not common practice to have babysitters or leave children in daycare, so that was never an option on my part. It’s either one income household and the other one just be part-time. Took up computer programming and I worked for a software company. That was almost eight years later since arriving here in the US.