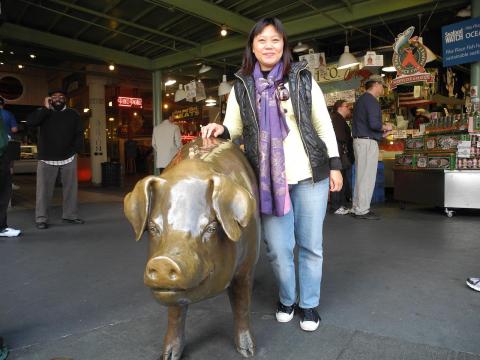 
My younger daughter used to sleep with this toy when she first born. She is.. Phoebe is… do I need to mention her name? (No need) She is already 21 years old. I have this toy for 21 years.

In 2012, our immigration applications were approved. My two daughters and I flew to Seattle from Hong Kong in May that year. During the first year, my older daughter stayed and applied for different colleges. I went back to Hong Kong with my younger daughter as she still had to complete her high school diploma. A year later, my younger daughter seemed to be interested in living in America, so she flew to Seattle by herself. For past five years, I had been going back-and-forth between Hong Kong and Seattle once a year.

What is the biggest difference between Hong Kong and Seattle?

They are totally two different worlds. Hong Kong is a fast-paced and a prosperous city. There are a lot of people on the street whereas there are fewer people on the street in the U.S., and people here look more relaxed. The air is fresh here. Although Seattle rains all the time, the sky is big here and there are a lot of trees and plants. The environment here is better than Hong Kong, because Hong Kong has too many cars and people.

Another main reason that made me move here for good is because of our two dogs. They immigrated from Hong Kong just like us, in September 2017. They are both Labradors. They appeared to be happier since they got here, they get to run around at the yard instead of staying inside of a cramped place in Hong Kong. As I see how happy they are living in the U.S., so I wanted to move here to be with my daughters and our dogs.