"I didn’t talk to my parents, it was too expensive to make international calls. We didn’t have internet back then of course. I would send postcards and my father would write me back." 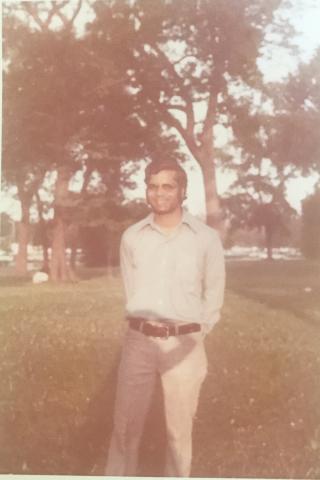 Pingali Mohan Rao, known as Mohan, came to the United States on January 23, 1968 after receiving admission to the University of Wisconsin’s Master in Structural Engineering program. The 1965 Immigration and Naturalization Act signed by President Johnson marked a radical break with previous policy be eliminating previous quotas based on national origins. After this act was signed, universities saw a wave of students from India and other Asian countries pursuing graduate degrees in engineering and the sciences.

"My brother and sister-in-law, who lived in Beloit, Wisconsin picked me up from O’Hare airport and we drove 80 miles to their place. I stayed there for a few days to settle in.” When asked if his brother had any advice for him, Mohan laughs, “Well, his advice for me was ‘In America, everyone is on their own.’ And I said, ‘Fine, no problem!”

“My brother explained how to get to the University. I walked to the bus stop and paid $2 for the Greyhound bus. When I arrived, I had no idea where to go – but I knew I needed to register at “Bascom Hall”. It had snowed three to four inches. I had ordinary shoes, not snow shoes – it was at the top of the hill. I had a jacket but not a heavy jacket.”

After registration, next on the agenda was finding a place to live. “I asked some people where to look – they suggested being as close to the engineering school as possible. When I went to Randall street, the place of my department, I saw signs about accommodations. For $10 week, I was able to stay there and was assigned a Korean roommate.”

“I had never really cooked before, but I knew how to make potatoes and rice. For lunch, I would make a sandwich and every night I would eat rice, with the potatoes and yogurt and some avakaya (spicy mango pickle) I brought from India.”

Mohan had some money his father gave him and the engineering department paid him $250 a month to work as a teaching assistant. These funds were enough to pay for the apartment and food. “I didn’t have a car,” he recalls. “As far as winter clothes, the school knew students like us would come with nothing so they had a charity place where we could go to and pick whatever we wanted. I got myself a big jacket and big boots, and I was all set.”

“At first, I visited my brother every few weeks because I was homesick initially. But after that, I didn’t go as often and he ended up moving to New Jersey that year. I didn’t talk to my parents, it was too expensive to make international calls. We didn’t have internet back then of course. I would send postcards and my father would write me back.”

“I enjoyed my graduate studies. I was studying under the masters in my field and learned a lot. While I was in the program, I was interviewed by several firms including Chicago Northwest Railway. They offered me the princely sum of $9,800/year. That doesn’t seem like much but it was more than a lot of my friends. I moved to Chicago after graduating.”

Mohan never considered returning to India. “India was not as prosperous in those days,” he recalls. “There were fewer jobs. After graduating, I was legally allowed to work in the US for six month increments and would have to check-in with the iImmigration office after each period was complete.” After the second visit, the immigration officer suggested that Mohan apply for a green card, which he did and received within 15 days. Today, the wait period for skilled laborer from India averages 12 years.

“In 1972, I returned to India for a visit and I was introduced to girls with the idea of getting married. I met a girl named Anu. We got engaged and I returned a few months later for the wedding. She got her green card right away and we came back together.” Mohan and Anu made their home in Chicago for the next year, before moving to Ann Arbor and eventually settling in Philadelphia when they became parents. Mohan worked as a structural engineer at Southeastern Pennsylvania Transit Authority (SEPTA) and the New York City Transit Authority until he retired in 2003 at the age of 60. He was a vital part of the city response during the 9-11 crisis.

When asked if it was easier to be an immigrant in 1968, as one of the first wave of individuals to cross the shores from India - or now – Mohan does not hesitate, “It was much easier when I came. Back then, they were clamoring for people with our educational background to be part of American society. Back then, it was the easiest thing in the world for people like us.”