"It was quite a long time before we reached him, and my sister was saying, 'Let’s go back. We’re not staying here!'" 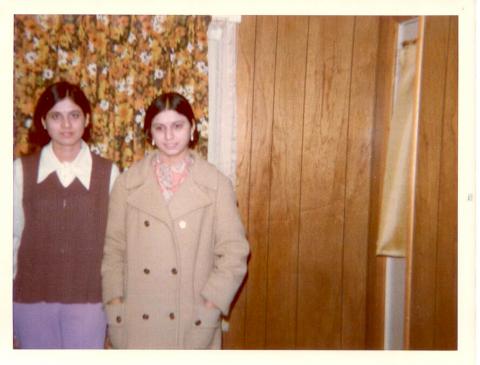 My sister [Smita] and I landed in New York airport, but the flight carrier was changed, so the first thing I remember was that when we were in the airport nobody came to pick us up. The information was not relayed to the other aircraft. So the problem was trying to contact my brother-in-law Ramchandra, who was waiting in some other terminal. There were no cell phones at the time, and we contacted the airline. It was quite a long time before we reached him, and my sister was saying, “Let’s go back. We’re not staying here!” I was telling her, “You take care of this luggage and I’ll try to contact him.” She said, “No, we have a return ticket, let’s go back home.” That scene I remember very well. We were in long coats, because it was so cold. There were white-skinned people all around, and I thought, “Oh my god, where are we?” Many hours later, I don’t know if Ramchandra got the message or not, but then we saw him.

I had to fly to Atlanta after that from there to meet my husband Vinod. Ramchandra said that you need to eat. I don't think we ate non-veg, we ate salad. It was very cold, it was Thanksgiving Day, and you could see the snow outside. After that, I flew to Atlanta the same day from a different terminal, and Vinod came and picked me up.