" I almost had a heart attack because I thought that they were going on the wrong side of the street because in India, like in Britain, they drive on the left side. So that was my first thought." 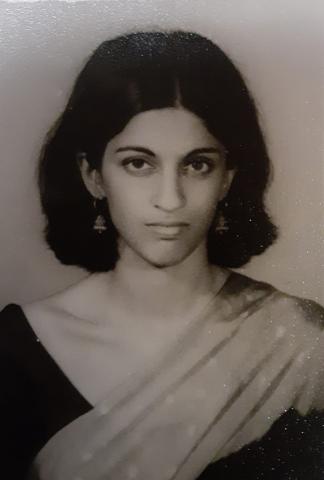 I had obtained a green card, meaning I was a permanent immigrant, and I had passed the ECFMG exam, which is a qualifying exam to work in the medical field--I was a radiologist in India. So I decided to just venture and come here and find a job.

From India I came by a flight to JFK airport in New York. Then I took a Greyhound from there and I came to Times Square. At Times Square, one of my co-residents from India met me and then took me with my luggage by subway to South Bronx.

What were your first impressions of the country when you arrived?

Well first, when I sat on the bus and the bus was on the right side of the road, I almost had a heart attack because I thought that they were going on the wrong side of the street because in India, like in Britain, they drive on the left side. So that was my first thought. But then, I realized and I calmed down. And at that time, in 1975, South Bronx was a very tough place so when I reached South Bronx at 8pm, I was a little bit disappointed because what you see in the American movies was quite different from what I saw on the street at that time. But because it was like living in Bombay, which is a tough city, it wasn't that much of a shock and I became accommodated within a few hours.

What did you do on your first full day?

The next morning, my host family told me the two different ways to get to Mount Sinai Hospital, which is located on 100th Street between Fifth Avenue and Madison. I took the two subways at eight in the morning and I reached the hospital and I had my interview there for the residency program. I managed okay because I think New York subways have it pretty nicely explained on the platform where you should get off, and I also asked people and they were very helpful.

What were some learning experiences you had in your first few weeks?

First of all, I was only allowed $100 as exchange money. And so the first thing I realized was that the $100 disappeared really fast. Within a few days, they were gone. And I had a good interview [at Mt. Sinai], and I got the job and started within 48 hours and so that was very nice. And the secretary was extremely helpful to get me settled into an apartment. People were helpful, I'll say that. I started working and I had about 15 other residents at different levels of program working with me and they were also extremely helpful. So on my first few days in the USA, I had an extremely good impression.

What did you find was the biggest difference between America and Mumbai?

I could see more similarities, because Mumbai is a very cosmopolitan city and New York is also very cosmopolitan. There are all kinds of people, so I did see that similarity. The difference I would say, was, like working in the hospital, you had to do everything yourself. In India, from the cafeteria they would bring us tea to our department so we didn't spend any time going and coming to the cafeteria, whereas in New York we had to stand in the line to get coffee or a sandwich or whatever to eat. So I thought that was a little different. But I learned very fast; being young, I could adapt very easily. And the other thing was that back home in India, my mother would cook and we had a person helping her to cook, food whereas in New York I found out that I wasn't actually much of a cook, so I had to learn to cook, and I would ask people around me for recipes because those days we didn't have the internet to give us all the recipes and such like information.

What did you find was the most difficult aspect of being an immigrant?

I didn't find anything difficult. New York is a very easy place to be as the first place for an immigrant. The streets are simple and I was a big walker. So instead of spending any money on buses or taxis or subways, I would just walk. If it was 60 blocks, I would just walk. People were helpful overall, very helpful. Now the difficult part was me. It was my problem, because I really would struggle with cooking; that was the only thing I found difficult, cooking. Otherwise, the conditions and everything were pretty similar to India. Even in medicine, there wasn't much difference in the working conditions.

What was your favorite part about being in America?

I learnt! Some of the modalities had not started in India, like CT scans and ultrasounds, so I had the experience of learning these things and I was very excited to learn. It was challenging and very educational. We used to have a club for bone diseases; they would have all these big guys coming from all over the Northeast and in the evening they’d have the club. And in the club, they would throw in difficult cases and I would find it very interesting; I got to see cases from Harvard and Yale, and I could make the diagnosis, which was very satisfying.

Was anything about life in America shocking, or did it pretty much match up with the perception or ideas that you had had in India?

I think there was just one incident. So what happened was, I didn't get my social security card and so at my lunch break, I walked to the Social Security office, which was 25 blocks away. And that was in a part which was kind of dangerous with a lot of drunk people walking on the street, coming and trying to touch you or making comments on you. And that part, I found kind of scary and a little bit shocking. It was just that one day that I was a little shocked. And then there was another incident that happened: on the weekend, I was going to the Bronx from Manhattan and on the edge of the subway platform, there was a drunk man who was just reeling and the train was coming, and he fell onto the tracks, and the train was coming at a fast speed. I just threw up because I didn't want to see the train go over him. But there were other bystanders and two guys jumped in and pulled him out in the nick of time. But that was scary. Those were the main two instances I found scary and shocking.

Do you think that coming from one of the biggest cities in India equipped you for life in New York in a way a smaller town wouldn't have?

Yes. Coming from Bombay to New York was okay for me, it wasn't such a drastic change. In Bombay, I traveled by trains and buses and even in New York, I traveled by trains and buses. And so it wasn't that different. It's just that I was alone here, I didn't have any family, that part was depressing. But if you keep busy at work and in the house, then you get used to it.

What do you think in particular, you would want to share with a non immigrant about your experience?

I would say that it was a good experience to come to a foreign country and get adapted to it and be a part of it. Though, one more short incident which was kind of strange was once when I was walking on Fifth Avenue going home and one guy came and asked me, like, “What are you?” And I said, “I'm an Indian.” And he said, “What tribe?” I replied: “I don't know what tribe I am.” So he said, “That is strange, you're an Indian and you don’t know what tribe you are?” And so I just left it at that, but it kind of got in my head, like, what was he talking about, so I told my colleagues and they said he must be talking about the American Indians. And that was kind of amusing. But you know, overall, I think New York is a great city to be in because people are quite helpful and friendly. It's an easy city to live in for an immigrant. I was there for five years and then I moved to Houston, Texas for a new job.

Knowing what you know now, what advice would you give to a new immigrant coming today?

There are cultural differences, but to try and adapt to them. Look out for helpful people because there are many people who are helpful. It's not like I didn't meet people who were not helpful, I did meet one person who was not helpful, but walk away from them and be open and try to adjust if there are differences, try to adjust to them, and try to be part of the people here.

And overall, are you happy that you came to the United States?

I am, yes, I would say that I am happy that I came to the United States.