"In some ways, I felt more at home in the United States than I did back in India." 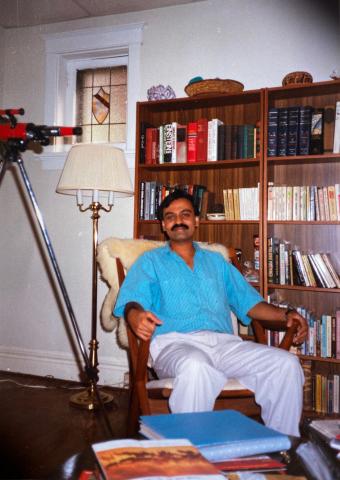 It was a comedy of errors. I arrived at O’Hare airport with two bags and lugged them off the belt, looking for a bus to Northwestern University. I didn’t know where to catch the bus and stood at the bus stop but buses whizzed by. I then realized the bus was picking up at another terminal. Then looking for the right bus to go to Evanston, I didn’t know how to pronounce the town’s name. By the time I arrived in Evanston it was four hours later.

Was it a difficult transition to make?

I’ve been extraordinarily lucky and blessed. I was on a scholarship, and so the worst thing I had to worry about was not being paid for a few weeks. There was a cultural adjustment – although my accent left a lot to be desired, I had some knowledge of Western society. Through reading, I felt a part of it and a lot of things came naturally to me. In some ways, I felt more at home in the United States than I did back in India.

It’s given me a stereoscopic perspective of culture. As I came to understand American culture better in my 20's, I thought my American friends were really not that different. It took another 30 years to realize that people are different. Your experiences and your starting point shape you profoundly. Accepting and understanding that has made it so much easier having lived in a totally different society.

I miss the sense of community. It can be intrusive and tiresome, but it’s also endearing and affirming. Meanwhile, a focus on individualism and bootstrapping to success are hallmarks of how America works. They are really admirable things but often fail to address the marginalized people in society.

India’s culture – one of family and land – can have underdeveloped notions of civic society. We don’t think of citizenship as important as membership in our community, and our relatives and friends are seen as more important in that regard. That balance is better here in the U.S. However, in India, there’s a sense that you can’t just leave people behind. Now that I think back, I had relatives and friends who were disadvantaged in some ways, but had the support of their joint family. That doesn’t seem to happen here.

What advice would you give someone arriving in the U.S. today as a new immigrant?

Everyone is different, and I wouldn’t presume to tell anyone what they should do. What I could’ve benefited from is to be more open to different perspectives. As an immigrant, there is a sense of wanting to preserve who you are, which vies with your wanting to learn new things. One thing that makes America great is the ability to explore, do more, and learn what it is to be American. That being said, it’s hard to experience new things unless you come from a secure place. If someone is in a different environment economically or health wise or due to their immigration status, and if they don’t feel emotionally safe or financially secure, it’s hard to do those things.

Over time, how have your views changed regarding your experience?

I’ve become much more engaged when it comes to political issues. I’ve seen the immigrant experience through the eyes of others who wrote about it and have come to realize how lucky I was to have the smooth experience I did. However, looking around 40 years after I arrived, not a lot has changed for people. Things should’ve been done to make society fairer and better. It’s only in the last 10 years that we’ve observed that as our failure to act – that we haven’t pushed for the changes we should’ve pushed for.